You are here: Home / environmental offence

Ingram Asphalt Inc., located in Toronto, was recently convicted of five violations under the Ontario Environmental Protection Act and was fined $175,000 plus a victim surcharge of $43,750.  The company was given 24 months to pay the fine.

The convictions relate to permitting the discharge of Benzo(a)Pyrene, a contaminant that exceeded established standards, and for violating three ministry approval conditions, and for alteration of equipment without ministry approval.

Ingram Asphalt Inc. produces asphalt road pavement at a facility located on Ingram Drive in Toronto, within an industrial area shared with various businesses, and a commercial building with residential space.  Over the years there have been complaints regarding concerns about dust leaving the site and adversely impacting businesses and quality of life.

With respect to the prosecution on the discharge of Benzo(a)Pyrene into the air, the company was fined $100,000 for permitting the discharge for a specified averaging period and exceeding the acceptable levels under Section 20 (2) of Ontario Regulation 419/05 under the Environmental Protection Act, on December 11, 2017. The ministry was notified of the exceedance with reported levels in the air of 0.0000297 micrograms per cubic meter, compared to the allowable limits specified as 0.00001 micrograms per cubic meter, almost three times the allowed maximum.

Ingram Asphalt was fined $55,000 for three violations for non-compliance with a ministry approval for conditions outlined in the company’s December 2016 approval conditions specific to addressing concerns about air pollution. Despite efforts by the ministry to bring the company into compliance it was identified that the company was non-compliant in the following areas: (1) Condition No. 1 (5) restricts the height of storage piles to be less than the height of the associated barrier walls; (2) Condition No. 10 requires the installation of an opacity monitor in accordance with the requirements; and (3) Schedule “D” requires the company to submit a Source Testing Report in accordance with the requirements.

The company was fined $20,000 on one violation for altering the approved equipment by failing to connect pipe and duct work from the asphalt tanks to the batch dryer, which is part of the air pollution control equipment.

Benzo(a)pyrene and other polycyclic aromatic hydrocarbons (PAHs) are widespread environmental contaminants formed during incomplete combustion or pyrolysis of organic material. These substances are found in air, water, soils and sediments, generally at trace levels except near their sources. PAHs are present in some foods and in a few pharmaceutical products based on coal tar that are applied to the skin. Tobacco smoke contains high concentrations of PAHs.

Major sources of PAHs in ambient air (both outdoors and indoors) include residential and commercial heating with wood, coal or other biomasses (oil and gas heating produce much lower quantities of PAH), other indoor sources such as cooking and tobacco smoke, and outdoor sources like motor-vehicle exhaust (especially from diesel engines), industrial emissions and forest fires.

On December 10, 2018, GFL Environmental Inc. was sentenced after pleading guilty in the Ontario Court of Justice to violating federal environmental legislation. The company was fined $300,000.

The charges were laid January 2017 after inspectors determined that GFL had supplied tetrachloroethylene, also known as PERC, to nine dry cleaning operations in Toronto, Newmarket, Scarborough, Mississauga, Waterloo, London and Cambridge that had not adhered to containment measures required by law.  According to an indictment filed with the court at that time, infractions noted by enforcement officers included inadequate wastewater containment systems and floor drain plugs that were not resistant to PERC.

The company, along with president and CEO Patrick Dovigi, vice-president of sales and marketing John Petlichkovski, and Louie Servos, identified as a GFL employee, were each charged with 16 counts under the Canadian Environmental Protection Act, 1999, according to the indictment.

The resolution presented in court on December 10th saw GFL pleading guilty to two counts. The remaining charges were withdrawn at the request of the Crown.

After an investigation led by Environment and Climate Change Canada enforcement officers, charges were laid and GFL Environmental Inc. pleaded guilty to two counts of contravening the Tetrachloroethylene (Use in Dry Cleaning and Reporting Requirements) Regulations (SOR 203/79) under the Canadian Environmental Protection Act, 1999 for selling tetrachloroethylene, commonly referred to as “PERC” to owners or operators of dry-cleaning facilities that did not meet regulatory standards.

GFL was fined $150,000 for each offence; the minimum fine for a first-time offender is $100,000. The Canadian Environmental Protection Act, 1999 allows courts to fine offenders up to a maximum of $4 million.

SOR 203/79 prohibits anyone from selling tetrachloroethylene to dry cleaners unless the dry-cleaning facility is compliant with the equipment specifications set out in the Regulations, which aim to reduce releases into the environment.

The Regulations are unique in that in places the onus of the seller of “PERC” to ensure that the buyer (typically dry cleaning facilities) have the proper equipment and training to prevent the release of PERC into the environment.

The most important routes of exposure to tetrachloroethylene for the general public are ingesting contaminated water and inhaling ambient air.  Improper disposal and releases from dry cleaning facilities and landfills can lead to groundwater contamination and potential environmental exposures.

PERC is a dense non-aqueous phase liquid (DNAPL), meaning that it is only slightly soluble and more dense than water.  When released in the subsurface, it will migrate downward, adsorbing into soil particles, slightly dissolving into groundwater, and eventually making its way to bedrock where it will pool and continue to dissolve into the groundwater.  As a result, PERC is very difficult to remediate from the subsurface. 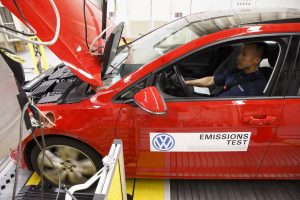 The investigation, led by Environment and Climate Change Canada, revealed that PF Résolu Canada Inc. had committed a violation to the Act, namely the deposit of a deleterious substance in waters frequented by fish.  The amount of the fine will be directed to the Environmental Damages Fund.

The deposit of a deleterious substance was into Comeau Creek situated in North Shore of Baie Comeau.  PF Résolu Canada Inc.’s Baie Comeau newsprint mill is located on the creek.

PF Résolu Canada Inc., also known as Resolute Forest Products (RFP), is a global leader in the forest products industry with a diverse range of products, including market pulp, tissue, wood products, newsprint and specialty papers, which are marketed in over 70 countries.

The company owns or operates some 40 manufacturing facilities, as well as power generation assets, in the United States and Canada.

Resolute has third-party certified 100% of its managed woodlands to internationally recognized sustainable forest management standards.  Resolute has received regional, North American and global recognition for its leadership in corporate social responsibility and sustainable development, as well as for its business practices.

In its financial statements, the company is required to record accidental releases of hazardous substances significant enough to risk damage to human and environmental health, or that have potential liability and reputational consequences. Between 2012 and 2016, Resolute recorded no such incidents. The company is also required to disclose in our published financial statements any fines of material significance for non-compliance with environmental laws and regulations, none of which were reported between 2012 and 2016.

The Baie-Comeau facility produces newsprint at a capacity of 319,000 tonnes per year.  There are 216 employees at the facility.