You are here: Home / Industry chat 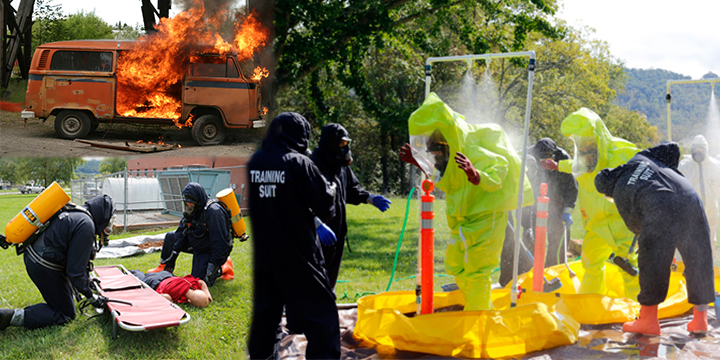 The following HMIT grants were awarded for 2017:

For 2017, one national non-profit fire service organization, the International Association of Fire Fighters was awarded a grant of $931,000.

“Well-trained first responders play a critical role in any hazardous materials incident, and this grant funding supports their efforts to protect their communities,” said PHMSA Acting Administrator Drue Pearce. “These grants are part of our comprehensive approach to improving the safe transportation of hazardous material across the country.”

Graphic Products, Inc. recently made available a new guide, Best Practice Guide to Shipping Hazardous Materials that helps convey the basics of hazardous material regulation.  From dry cleaners to heavy manufacturers, businesses that create waste must report loads they ship. It requires careful work to keep shipments safe and to protect the neighborhoods and environments these hazardous wastes pass through.

In the guide, Graphic Products, Inc.:

Readers of the Guide will see what each classification means, and how marking and documentation requirements interact.  Readers will also understand the overlaps between the the U.S. Department of Transportation rules and other chemical labeling systems, like GHS and HazCom 2012.  This guide will help you comply with the law, and make your shipments safer. 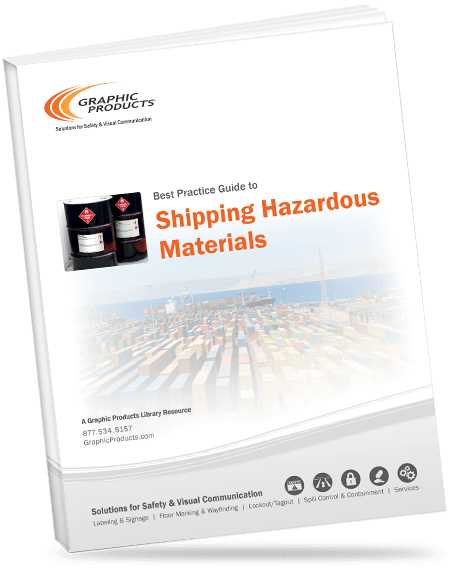 Recently, Dalex Canada Inc., located in Concord, Ontario, pleaded guilty in the Ontario Court of Justice to one count of contravening the Tetrachloroethylene (Use in Dry Cleaning and Reporting Requirements) Regulations made pursuant to the Canadian Environmental Protection Act, 1999.  Dalex Canada Inc. was fined $100,000, which will be directed to the Environmental Damages Fund.  The Environmental Damages Fund is administered by Environment and Climate Change Canada. Created in 1995, it provides a way to direct funds received as a result of fines, court orders, and voluntary payments to projects that will benefit our natural environment. 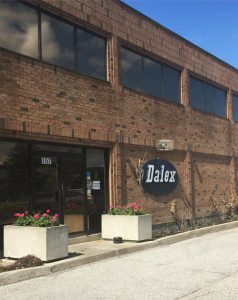 In addition to the fine, the court ordered Dalex Canada Inc. to publish an article in an industry publication, subject to Environment and Climate Change Canada’s approval.  Dalex Canada Inc. is also required to notify Environment and Climate Change Canada before resuming sales of the regulated product to dry cleaners. As a result of this conviction, the company’s name will be added to the federal Environmental Offenders Registry.  The Environmental Offenders Registry contains information on convictions of corporations registered for offences committed under certain federal environmental laws.

Tetrachloroethylene, also known as PERC, enters the environment through the atmosphere, where it can damage plants and find its way into ground water. 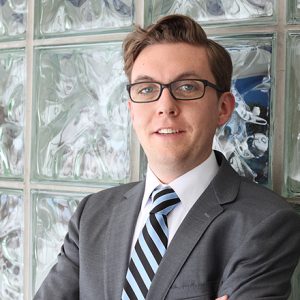 Regardless of your occupational specialty – environmental professional, facility safety expert, military or first responder – YOU’VE BEEN THERE.  Yeah, you’ve been at that incident where the hair stood up on the back of your neck.  The one where you thanked fate it was just a “close call” and nothing more.  What are you doing within your organization to learn from these incidents?  How are you equipping your personnel with critical tools to respond more effectively and safely?  More critically, what training are you giving them to utilize the most important tool –their BRAIN?

Chemical, biological, radiological, nuclear and explosives (CBRNE) emergencies can be huge, overwhelming, complicated and full of unknowns.  Since we can’t have a specific SOP for every event, it’s common for the responder to regress under stress.  In many cases, that means retreating from what we know best.  Often, this yields disorganized, unsuccessful outcomes.  Same bad habits –same failed results.  Experience is critical, but it must adapt to tested street truths.

It is critical that we not only learn from our past incidents, but from each other. FLIR Systems recently introduced FLIR PRIMED – a one-stop resource for response professionals.  FLIR PRIMED strives to deliver informative and useable information in the form of a video-series that includes techniques, tools, and checklists based on best practices.  What does PRIMED stand for?

A CBRNE event can overwhelm the response equation.  Although the chemistry and physics of such events are relatively unchanging and predictable, the human aspect isn’t.  However, predictable patterns or outcomes still exist in emergencies.  If we couple this with a keen sense of our personnel, we can utilize those markers to improve response effectiveness.  Here are some “next step” ideas you can implement to improve your safety and effectiveness during a Hazmat or CBRNE response: 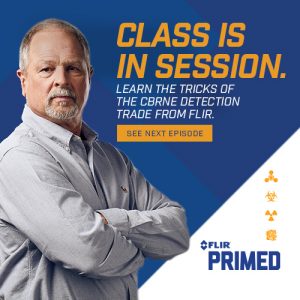 Grant Coffey is a retired Portland Fire & Rescue Hazmat Team Coordinator, College Fire Science Instructor, and  CBRNE expert of nearly 40 years. He trains Fire, Police, Military and industry Hazmat Responders. He has NFPA certifications for Radiation Specialist and is a State of Oregon Radiation Safety Officer. He is also a Hazmat Specialist and Incident Safety officer and has experience in Emergency Manage ment and various other CBRNE Hazmat disciplines.

The Transportation Safety Board of Canada recently issued a report on its findings related to the 2015 derailment of a train in 2015.  In its report, it ruled that a missed defect in an improperly repaired rail led to a 2015 freight train derailment in northern Ontario that caused numerous cars carrying crude oil to catch fire and crash into a local river system, the Transportation Safety Board of Canada said Thursday.

As a result of its investigation into the incident, the board recommended Transport Canada consistently collect data on general rail surface conditions — and not just previously recorded defects — to better focus its track inspections and help predict future rail failures.

“Track defect information is required to be reported to Transport Canada, while rail surface condition information is not consistently provided and rarely requested by the regulator,” said TSB chair Kathy Fox.

“By integrating rail surface condition data, the planning process may more clearly identify areas of potential track deterioration and the targeted track inspections can be better focused to reduce risk in the rail transportation system.”

Thirty-nine CN Rail cars went off the tracks near Gogama, Ont., in March 2015, while the train was travelling east at 69 kilometres an hour, less than the speed limit. As a result, 2.6 million litres of oil were released, igniting an explosion that destroyed a steel rail bridge, the TSB said.

“This was the third significant derailment involving a CN freight train in a three-week span in early 2015 … in northern Ontario,” Fox said, noting that Transport Canada had not inspected that area of track since 2012.

There were no injuries reported, but residents of the nearby Mattagami First Nation were advised to stay indoors during the cleanup due to possible smoke inhalation and told not to consume water from the community source.

The TSB said the derailment occurred after a recently repaired rail within a joint broke under the train.

But during the repair, he missed an internal defect called a vertical split head, which was present, but not visible to the naked eye, Johnston said.

The crack could have been detected with what’s known as a dye penetrant test, Johnston said, but that was not performed even though it was required by CN standards.

“While aware of the test, the employee had never performed one or seen one before,” he said. “CN’s training did not highlight the importance of the test and did not provide opportunities for practical, hands-on training.”

Given the botched rail repair, the TSB’s report notes that a “slow order” should have been applied to reduce the speed of the train on that section of the track, but none was issued.

Going forward, the TSB called on Transport Canada to gather data from railways on rail conditions — such as localized surface collapse — that can help identify areas of potential track deterioration.

Fox said Transport Canada considers various factors to identify areas of concern, most of which are events that have already occurred — such as the number of accidents, broken rails or track defects that required repair under track safety rules.

CN said it has taken action to increase safety measures following the 2015 derailments, from improving training for all track workers to implementing stronger engineering standards for its rail repairs and inspections.

“We have expanded our use of technology to analyse, monitor and inspect track across the CN network. We continue to invest to maintain, improve and protect our infrastructure,” CN spokesman Patrick Waldron said Thursday.

“This was a very unfortunate incident, the result of a broken rail, and we apologize to the residents of Gogama and the Mattagami First Nation for the impacts to their community.”

The Hazmat Suits Market research report, prepared by 360 Market Updates, provides an in-depth study on the current state of the Hazmat Suits Industry.

To begin with, the report elaborates Hazmat Suits Market overview.  Various definitions and classification of the industry, applications of industry and chain structure are given. Present day status of the Hazmat Suits Market in key regions is stated and industry policies and news are analysed.

The report focuses on consumption, market share and growth rate of Hazmat Suits in each application and can be divided into two major subcategories.

After the basic information, the report sheds light on the production, production plants, their capacities, production and revenue are studied in the report. Also, the Hazmat Suits Market growth in various regions and R&D status are also covered.

Further in the report, Hazmat Suits Market is examined for price, cost and gross revenue.  These three points are analysed for types, companies and regions. In prolongation with this data sale price for various types, applications and region is also included. The Hazmat Suits Industry consumption for major regions is given.  Additionally, type wise and application wise consumption figures are also given.