According to a recent market report by Acumen Research Consulting, the global Oil Spill Dispersants market size is estimated to grow at a compound annual growth rate above 3 % over the forecast time frame and reach the market value around USD 23.6 billion by 2026.

The term oil spill is a common term used in the contamination, by accident or human error, of water, land or earth by oil pouring or release. Oil sources are distributed throughout the world, and are drilled both onshore and offshore. Since oil is an essential source of energy, it is very important that oil is distributed and transported consistently. Oil is mainly transported by seaside vessels and land pipelines. Most accidents occur during the shipment of oil, transport and pipeline breakages or during land boiling. Small-scale oil spills take place regularly and can be easily and quickly controlled. 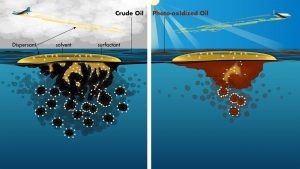 Dispersants contain detergents which help break oil into small droplets that can become diluted in the ocean. They also contain an organic solvent that helps the detergents mix with both the oil and water (Credit: Natalie Renier, Woods Hole Oceanographic Institution)

The market is mainly driven by frequent oil spills and the crucial importance of reducing the after effects on the environment of oil spills. These dispersants work in steady weather, since the efficiency of dispersants is reduced by high tides. Such limitations of oil discharges are the main restrictive factors on the global market for oil discharges.

The growth of the market of petroleum discharges depends directly on frequency, duration and volume of the oil discharges. Since the last decade, there has been a decrease of large oil spills every year, but very frequent small-scale oil spills are mainly driving the market for oil spills. Furthermore, a consistent selection of new petroleum resources and new oil plants will further boost the growth of the petroleum spill market. Another driving factor for the global market for oil spills is stringent government rules and penalties for reinforcing the response to oil spill.

The market share of offshore oil dispersant applications for the application segment was more than 70% in 2017. Similarly, it is estimated that the onshore application sector will grow steadily as newly identified onshore oil sources and frequent oil spills occur during transport or drilling of the oil. Onshore petroleum production accounts for 70 percent, which is projected to increase in the coming years. The demand for oil spill dissipators in onshore spill areas will be further increased.

Geographically speaking, Asia Pacific will lead the global market for oil spillers driven by increased oil demand in the region and increased production pressures on petroleum companies to explore further existing offshore and onshore petroleum sources. Such explorations are certainly expected to have some incidents due to failure or human error in technology / equipment. Middle East & Africa is similar to the Asia-Pacific region, and a major part of the world’s oil demand is made of it. Global financial, trade and political pressures in terms of oil production and demand will certainly compel oil companies to take risks as they explore new petroleum sources.