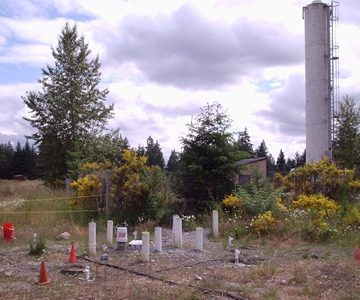 In the fall of 2019, a group of researchers from CDM Smith, the U.S. Army Core of Engineers, TRS Group, and the U.S. EPA presented a paper on the implementation and performance of thermally-enhanced bioremdiation for targeted dense non-aqueous phase liquid (NDAPL) source treatment at the Northwest Remediation Conference in Tacoma, Washington.
In the paper, they describe a multi-component remedy, including in situ thermal remediation (ISTR) and enhanced anaerobic biodegradation (EAB), was implemented at a Superfund site in Tacoma, Washington. The goal of ISTR and EAB was to reduce mass discharge from the source areas by 90%.
EAB was implemented over a large area of the site containing a thin silt unit with residual chlorinated solvent mass and two localized areas above containing DNAPL (predominantly 1,1,2,2-PCA and TCE). Following implementation, dissolved-phase concentrations increased in the DNAPL areas due to enhanced dissolution. Reductive dechlorination products increased, but at a slower rate than desired.
Thermal enhancement by electrical resistance heating (ERH) was designed to increase the rate of dissolution of the DNAPL and to increase the biodegradation kinetics. The ERH treatment zone was created using an array of electrodes around each DNAPL area, with temperature monitoring in the center of each array.
The ERH system was maintained at a target temperature between 45-50°C throughout most of the 12-month operation. Monitoring data indicated that the smaller DNAPL source was substantially depleted during the first six months of operation, while the larger DNAPL source exhibited declining concentrations after 12 months of operation.
Monitoring indicated only minimal biodegradation occurred at the DNAPL-impacted locations. Rapid reductive dechlorination occurred in areas immediately surrounding the electrode array, where temperatures were slightly lower and more favorable for enhanced biological degradation. Since the implementation of ERH, PCA and TCE concentrations in the DNAPL source wells have declined between 80 and 99%.
https://hazmatmag.com/wp-content/uploads/2020/01/heat-enhanced-bio.png 300 360 hazzmatt1 https://hazmatmag.com/wp-content/uploads/2017/01/hazmat-logo.jpg hazzmatt12020-01-20 16:01:442020-01-30 16:17:01Thermally enhanced bioremediation for DNAPLs

Financing Soil Remediation: Exploring the use of financing instruments to blend public and private capital

In the Sale of Property, Responsibility for Removal and Remediation of Underground...