The class of chemicals called PFAS (Per- and Polyfluoroalkyl Substances) are often referred to as ‘the forever chemicals’ because they are highly persistent in the environment and will take hundreds if not thousands of years to disappear from the soil and groundwater where they accumulate.  The Netflix film, The Devil We Know, and the newly released film, Dark Waters, have brought these chemicals to popular awareness.  As we now know, two substances in this chemical class – PFOS and PFOS – are the focus of multi-million dollar lawsuits due to the cover up of data demonstrating health impacts such as increased cholesterol, kidney cancer, testicular cancer, low birth rates, thyroid disease, and weakened immunity.  Over 99% of all Canadians tested by Health Canada’s biomonitoring surveys, have PFOA and PFOS in their blood and other organs including communities in the far north.  Producers of PFOS and PFOA voluntarily stopped production in 2002 resulting in a slight decrease of these two PFAS in sampled populations, but other PFAS are now turning up in Canadians. Yet the Canadian regulatory response to this crisis is lacking urgency and transparent communication with impacted communities.

PFAS is widely present because  for over sixty years these chemicals have been used as stain, oil and water repellant chemicals in  clothing, carpets, grease-proof paper, ski wax, cookware and cosmetics and also widely used in firefighting foam and other industrial applications.  Their widespread use raises the question why it took so long to highlight the risk to human health and wildlife and why regulatory response has been so slow.  This is partly because scientists lacked the analytical capability to measure these chemicals in the environment until recently.  At the same time, PFAS, as with thousands of chemicals were historically allowed on the market with no toxicological screening requirements.  Even today, most new  PFAS, which industry is now switching to as replacements for PFOA and PFOS, lack full toxicological data yet they remain unregulated and on the market. 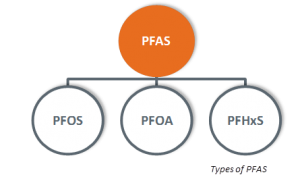 In Canada most uses for PFOS were prohibited in 2016 aside from exemptions for specific uses.  In 2012, the federal government concluded that PFOA was an ecological concern. But Health Canada maintains that PFOS and PFOA are not a concern for human health at current levels of exposure.  Most recently in June 2019 Transport Canada allowed airports to use PFAS-free firefighting foam, which shows a more precautionary approach as it targets the whole class of PFAS, but this is only a start.  There are over 5,000 PFAS in use and they are just as persistent in the environment as PFOS and PFOA, with many known to be highly mobile in rivers, lakes and groundwater.  None of these are restricted in Canada.

For Canadian adults, our main exposure to PFAS is via household dust, ingestion of food and air – in fact studies of air in Vancouver homes found levels of PFAS were twenty times higher than air outside the homes due to PFAS inside the homes.  Children, infants and toddlers are most at risk from PFAS exposure due to hand-to-mouth contact with PFAS treated products.  In addition, Canadian research has demonstrated PFAS in the leachate and air of landfill sites, due to the amount of PFAS in the clothing, carpets and consumer goods that have been discarded into landfills over the years and which are now leaching these chemicals into the environment.  PFAS are found in the air and effluent from wastewater treatment sites as well as in the sewage sludge which can be spread on land.

If this situation seems worrying, it is.  We lack full transparency of where contamination sites are in Canada and full accountability for who is responsible for the cleanup. Remediation is expensive and technically challenging which may partly explain such inaction.  The region downstream of Hamilton airport has still not been cleaned up eight years after high levels of PFAS contamination were discovered.  The extent of contamination in Canada is difficult to know, unlike the disclosure afforded to US citizens by many US state regulatory bodies.  The use of PFAS in firefighting foam at military bases, airports and refineries is increasingly acknowledged to be a common source of  water contamination but public information is absent on site specific monitoring data or even if groundwater wells are being monitored.  In December 2018 Health Canada released Canadian Drinking Water Guidelines for PFOS and PFOA which are substantially weaker than US based guidelines and to date British Columbia is the only Canadian province to establish provincial drinking water regulations.

We urgently need to see federal and provincial governments take action to phase out the entire class of PFAS in consumer and industrial use; strengthen Canadian drinking water standards to be more protective of children’s health and radically increase public right to know about the presence of PFAS in consumer products, local drinking water, and discharges into our communities. Tackling these forever chemicals requires an informed and coordinated public response which has sadly been lacking to date.

This article has been republished with the permission of the authors.  It was first published on the CELA website.

Bev Thorpe is an environmental consultant and principle author of CELA’s reports on PFAS.  Bev works with advocacy networks, companies and governments to advance an economy without the harm of hazardous chemicals.  She is a long time member of the Coming Clean network in the USA and she works with European and Asian networks.

Fe de Leon is a researcher with the Canadian Environmental Law Association (CELA) and has worked extensively on toxic substances particularly in the Great Lakes Basin, on the federal chemicals management plan and on international efforts to address persistent toxic substances through the Stockholm Convention on Persistent Organic Pollutants, the Great Lakes Quality Agreement, and a global treaty to address mercury.

What is the difference between external & internal radiation exposure?
Scroll to top