As reported in the Edmonton Journal, unsafe levels of hazardous chemicals were found in unoccupied land near the property that was previously occupied by a wood treatment plant site. However, the analytical results from soil samples taken from residential properties in the vicinity of the plant found no hazardous chemicals in the top level of soil.

An Alberta Health official recently stated that soil testing has been completed in the Verte-Homesteader community – located near the former Domtar wood treatment facility. 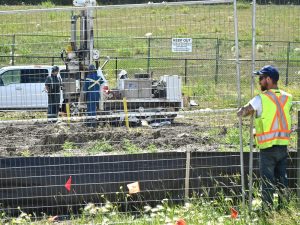 “The results show no issues in the surface soil of any of the homeowners’ properties, but there were four areas of unoccupied land in the southeast corner of the neighbourhood where chemicals were found above health guidelines and that area is now being fenced off,” spokesman Cam Traynor said in an email.

In the spring, about 140 homeowners near the site of the former wood treatment plant at 44 Street and Yellowhead Trail were warned soil and groundwater in the area was contaminated with a list of potentially cancer-causing substances.

Officials said no contaminants were known to be in residential areas.

From 1924 to 1987, the land was the site of a plant in which toxic chemicals were used to treat railroad ties, poles, posts, and lumber. Parts of the property are now a housing development. For manufacturing products wood, it can be necessary to undergo heat treating and similar processes to get them in the desired shape and structure, which is why most plants that provide the necessary service should be located away from residential areas. If the chemicals aren’t monitored and kept in check, they can sometimes lead to a hazardous environment, especially for those living nearby.

The site’s current owners and developers, 1510837 Alberta Ltd. and Cherokee Canada Inc., were ordered to build a fence around the contaminated land to reduce potential health risks earlier this year. Cherokee Canada did not immediately respond to a request from the Edmonton Journal.

Alberta Environment and Parks also directed the companies, including former owner Domtar, to take environmental samples and create plans to remove contaminants and conduct human health risk assessments. The orders also affected a greenbelt southeast of the site currently owned by the City of Edmonton.

The recently completed testing covered the top one-third of a metre of soil. Traynor said deeper soil testing in the broader area is ongoing. That work, along with a human health risk assessment, is expected to be completed this fall.