This year’s conference is about charting the future of the CBN. (Image from CBN).

On June 13, 2018, The Canadian Brownfields Network (CBN) held their 8th annual conference, taking the form of a National Brownfield Summit. This year also marks the 15th anniversary of the 2003 National Roundtable on the Environment and the Economy report, and the cornerstone of this year’s summit was to revisit the original report and reflect on the progress since then, as well as the challenges that still need to be addressed.

After an introduction by president Grant Walsom, the conference began with the keynote speaker Marlene Coffey, Executive Director of the Ontario Non-Profit Housing Association, who spoke about previous examples of the developments on Brownfields, including housing developed on a Goodyear Tires site, or the Vancouver Olympic village or Toronto Pan American housing facilities.

She spoke of Toronto’s current housing crisis and how costs have outpaced income for many renters due to the market response to the economic growth in the Greater Toronto Area, as well as Hamilton and Waterloo. She also spoke about how condominium development is preferred due to the pre-selling and reselling markets providing profit and equity for the developer before and during construction.  Contrast that to rental housing, where developers of must put up front all costs of development before any profits.

The city of Toronto’s plan to address these concerns include building 69 000 affordable rental units within 10 years, extending the life of 260 000 units, as well as income support for 311 000 households. In addition, the federal government launched the National Housing Strategy in 2017, with $40 billion over 10 years to support affordable housing initiatives across Canada. Coffey reports that municipality participation is key to obtaining funding for affordable housing, and a role that can be played is to donate available land for development.

A series of professional presentations followed, discussing various emerging investigation and remediation techniques. These included Dr. Barbara A. Zeeb discussing the use of phytotechnologies to remediate brownfield sites. She compared the traditional method of soil excavation, transport, and disposal to phytoextraction – the use of plants to remove the contaminant while leaving the soil intact and reusable, such as using natural and native species to remove organics like DDT. Other benefits include its cost effectiveness and the uptake of greenhouse gasses, but technologies are site specific, and can take years to remediate fully – highlighting the role that phytoremediation can play alongside traditional remediation methods. 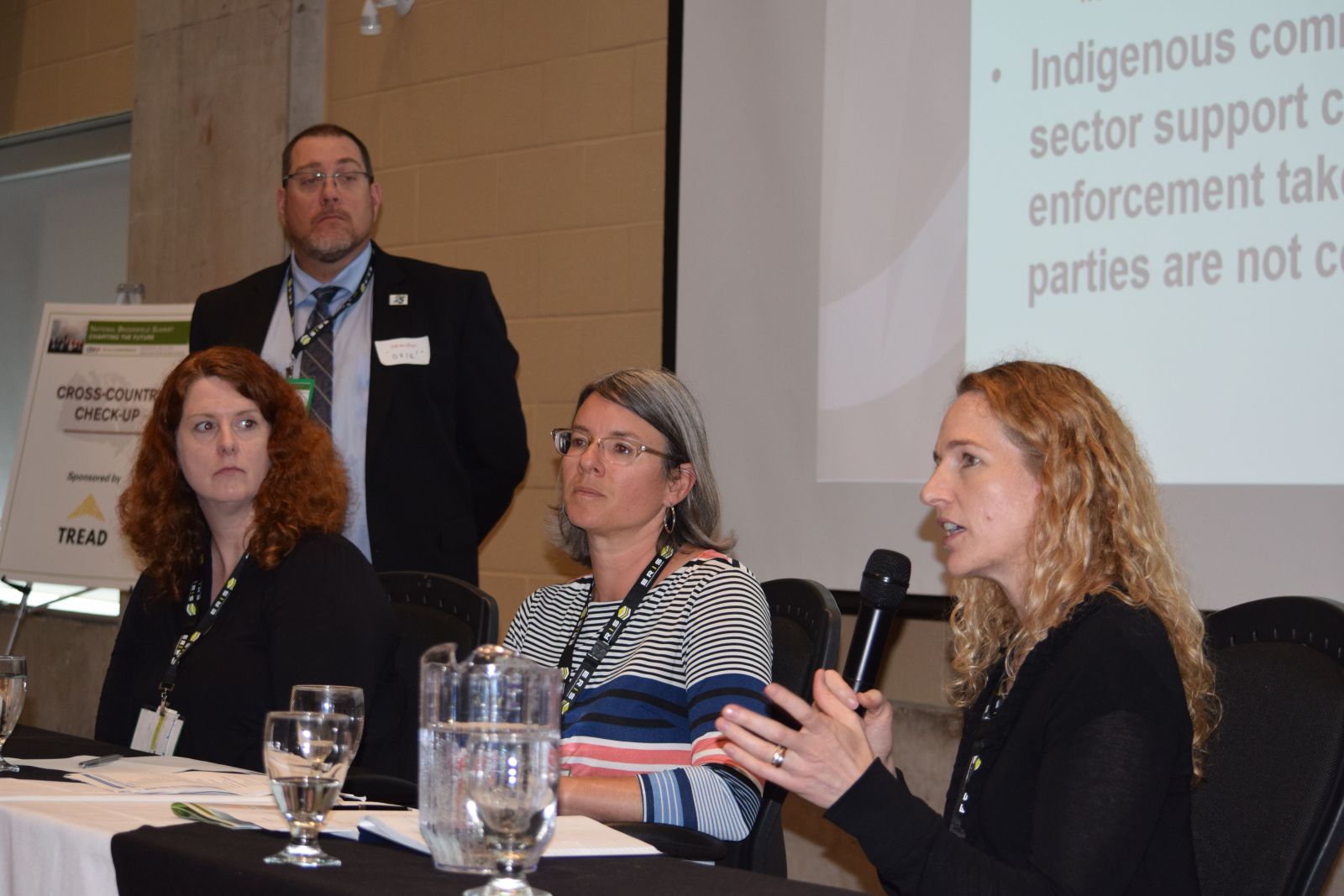 A cross-country checkup with panelists from across Canada discussed the changing landscape for excess soils. Speakers include Krista Barfoot (of Jacobs Engineering Group) speaking about Ontario’s proposed guidelines on excess soils, such as the emphasis on the use of excess soil management plans and addressing issues such as situations where there is no beneficial reuse site. Lisa Fairweather spoke about the Alberta’s Remediation Certificate and its impacts on reducing barriers to brownfields development; and Kerri Skelly spoke about British Columbia’s new excess soil regulations and its goals of clarifying rules for businesses moving soil and increasing the opportunity for soil reuse. 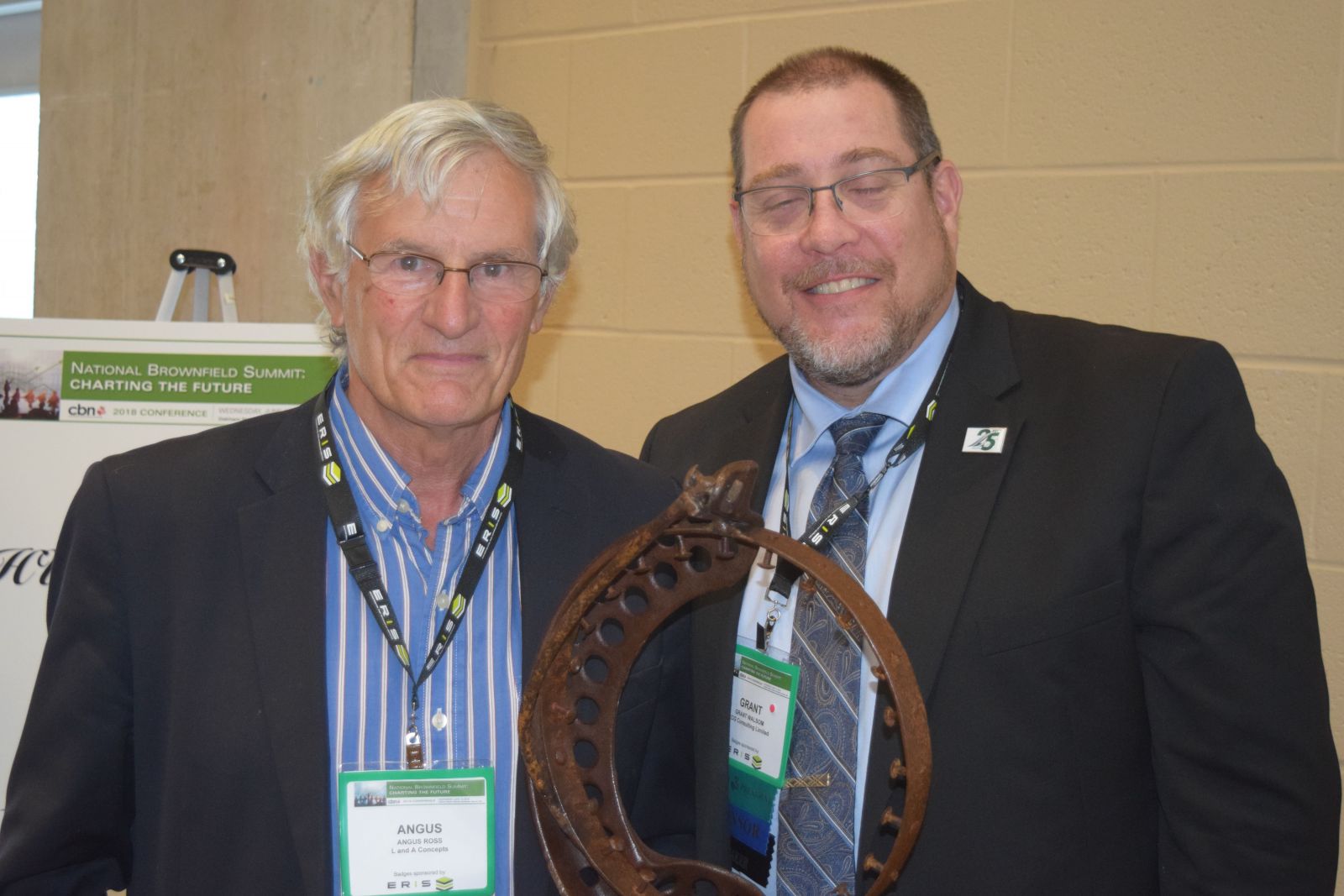 Angus Ross (left) with Grant Walsom. (Photo from the CBN).

Before breaking up into working groups, the final presentations reviewed the current state of brownfield development in Canada. Angus Ross, who chaired the original task force, discussed how the National Strategy succeeded in addressing liability issues, financial funding, and building public awareness of brownfields. A major recommendation was the formation of a national brownfield network, which led to the CBN. 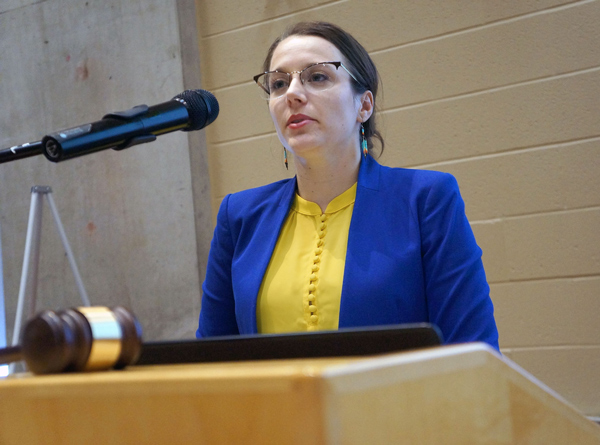 Reanne Ridsdale presenting the results of the CBN/Ryerson survey. (Photo from the Daily Commercial News).

Following was a presentation by a Ryerson student planning studio group compared brownfield policies of each province, based on criteria such as clear policies, an accessible brownfield site inventory, and incentives for development. Ontario, Quebec, and British Columbia were considered to be very progressive in their policies towards brownfield development, but improvements could still be made across Canada in terms of standardizing rules and policies and producing developer friendly guidelines for site remediation. Then PhD student Reanne Ridsdale talked about the results of the CBN/Ryerson survey of the brownfield community’s view of progress in the last 15 years. Respondents indicated that the CBN is too eastern focused on central and eastern Canada, with little presence in the Prairies, as well as being too research-focussed and not conducting enough outreach.

Nature based solutions for contaminated land remediation and brownfield redevelopment in cities: A review
0 replies