As reported by Don Proctor in The Daily Commercial News, the federal government has an important role to play in supporting brownfield development, suggests a recent report authored by third-year undergraduate Ryerson University students working on behalf of the Canadian Brownfields Network (CBN).

“There is a sense among industry professionals and academics that the industry as a whole has not progressed as much as it should,” said one of the students, David Sturgeon, at the CBN’s annual conference held recently at the downtown Toronto university campus. 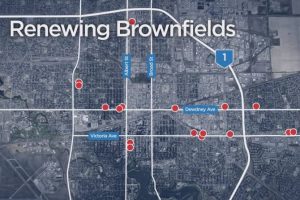 Sturgeon said the student team organized a three-tier rating scoresheet for each province’s progress on brownfields. B.C., Ontario and Quebec got the highest marks. Quebec is a leader because of its incentives-based cleanup programs. One initiative offers 70 per cent funding for onsite remediation work.

Quebec also has an accessible and up-to-date brownfield site inventory, which is a step ahead of other provinces, Sturgeon told delegates.

While the country’s three most populous provinces scored high, the students ranked Alberta lower down, closer to the middle tier.

“It (the Alberta government) has made quite a bit of progress towards cleanup in the last couple of decades,” Sturgeon said. “But where they struggle is helping developers to act sooner than later on idle or vacant contaminated sites.”

The student team was led by Chris De Sousa, the vice-president of the CBN and a professor at the School of Urban and Regional Planning at Ryerson University. De Sousa said the study compiled extensive information on brownfields from federal, provincial and territorial governments. Also reviewed were provincial stakeholder groups and comparisons were made with the U.S. and the United Kingdom.

Reanne Ridsdale, a Ryerson PhD student, conducted research into actual practice versus the objectives outlined in the National Round Table on the Environment and the Economy (NRTEE), founded in the late 1980s. For a survey of about 6,500 brownfield remediated sites across Canada, Ridsdale polled 80 participants, including environmental consultants, government officials, several lawyers and financiers.

Eighty-five per cent of those polled said brownfields were a medium to high priority in their organization.

She said 59 of the 80 respondents indicated Canada would benefit from a national fund for brownfield redevelopment. The top three developmental barriers indicated by respondents deal with remediation costs and lack of information available on site conditions, Ridsdale said.

The survey also supported the CBN as a national organization but some respondents were negative because the CBN does not receive federal funding so its scope is limited.

“We are a little bit eastern-centric,” which is probably because of the lack of funding, Ridsdale told delegates, adding the survey results will be published as part of a white paper this summer.

Angus Ross, chairman of L and A Concepts, chaired two government task forces on brownfields, including one that created the National Brownfield Redevelopment Strategy for Canada in 2003. The findings were not the last word on brownfields “but they did a tremendous job in kickstarting the entire brownfield file in Canada,” he said.

Ross, who was appointed by the federal government in 1996 to head the NRTEE and in 2004 to chair the CBN’s advisory panel, said brownfields became “a household word” in the early 2000s through media reports on the NRTEE.

“We got very immediate provincial and municipal buy-in,” he told delegates at the conference.

Nominations for the 2020 Canadian Brownie Awards Are Now Open

$250 million Canadian Fund for Technology Companies that can modernize Industries