Blog - Latest News
You are here: Home / Energy / Vancouver files claim against owners of vessel that leaked fuel in 201...

As reported by CTV News, the City of Vancouver has filed a federal court claim against the owner of a vessel that spilled fuel into English Bay in 2015, as part of the city’s continuing effort to get compensation for its response efforts.

Vancouver Mayor Gregor Robertson says three years after the MV Marathassa spilled 2,700 litres of bunker fuel into the bay, the city still hasn’t been compensated for about $550,000 it spent on response efforts.

Robertson says Vancouver has sought repayment through the federal government’s Ship-source Oil Pollution Fund, but has only been promised compensation for 27 per cent of its costs — something Robertson called “totally unacceptable.

“It’s ridiculous that it’s taken over three years now fighting for our costs to be covered by an oil spill in our harbour,” Robertson told reporters gathered at Sunset Beach in Vancouver on Sunday.

The city’s claim against the ship owners — filed last month but announced on Sunday — calls for damages, interest and court costs related to the spill.

Robertson said the city’s difficulty in getting paid back for what he described as a “relatively small oil spill” shows there aren’t enough measures in place to protect coastal communities against more major spills.

He said the costs and impacts of a potential diluted bitumen spill from the increased tanker traffic that would come with the Kinder Morgan Trans Mountain pipeline expansion has not been meaningfully addressed by the federal government.

Robertson said the Ship-source Oil Pollution Fund was set up by the federal government to act in the interest of communities like Vancouver, but is failing to do so.

“It clearly does not do that, does not deliver the results. This speaks to the greater concern we have with Kinder Morgan and oil tankers,” he said.

Transport Canada, which oversees spill response, could not immediately be reached for comment.

The claim’s statements have not been proven in court. 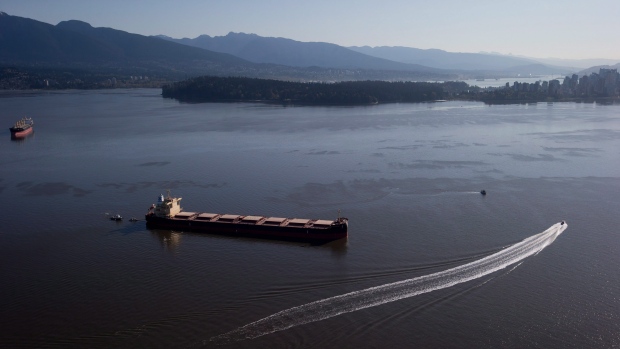