The Ontario Ministry of the Environment and Climate Change (MOECC) recently issued an Emergency Director’s Order to Ontario Graphite Ltd. (OGL) related to its mining site in Butt Township, Kearney, Ontario.  An Emergency Director’s Order is issued when the MOECC is of the opinion that inaction of a situation can result in one or more of the following: danger to the health or safety of any person; harm or serious risk of harm to the environment; or injury or damage or serious risk of injury or damage to any property. 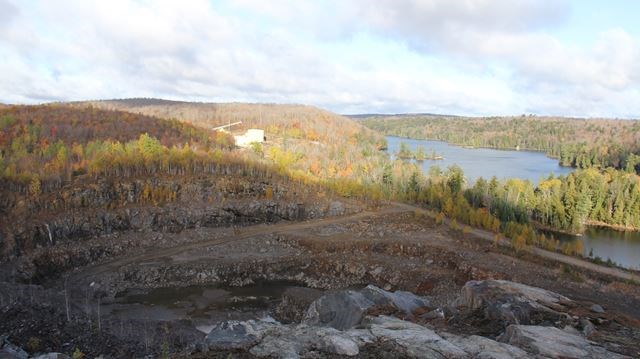 Kearney is a town and municipality in the Almaguin Highlands region of Parry Sound District of Ontario, Canada.  With a landmass of 531 square kilometres and a year-round population of 882 in the Canada 2016 Census, Kearney claims to be the “Biggest Little Town in Ontario.”  Butt Township was amalgamated with the Town of Kearney in 1979.

Since the issuance of Director’s Order Amendment No. 1 Ontario Graphite Limited (OGL) has reported to the MOECC multiple exceedances of discharge limits specified in the Environmental Compliance Approval (ECA) issued for the Kearney Mine industrial sewage works and Ontario Regulation 561/94 (i.e. including exceedance of limits for acute toxicity to test organisms Rainbow Trout and Daphnia magna, iron, total suspended solids and pH).

As requested by the MOECC, OGL proposed a short term management action plan to address the effluent discharge limit exceedances from the polishing pond until such time that construction can be completed on the industrial sewage works to enhance treatment efficiency once approved by the MOECC through an ECA amendment. OGL further indicated to the MOECC that an application to amend the ECA for necessary modifications to the industrial sewage works is currently being prepared.
Following the MOECC’s review of the short term management action plan and monitoring data submitted by OGL, the MOECC is concerned that measures proposed by OGL will be insufficient in achieving adequate treatment until such time that construction and operation of the proposed modification to the industrial sewage works, subject to the planned application and subsequent approval by the MOECC, if issued, are completed.

Currently, the lime dosing system being used at the Kearney Mine as part of the existing industrial sewage works operation is operated on a batch basis over, typically, an eight hour period during daylight hours.  The enhanced pH monitoring and reporting required by the January 31, 2018 Director’s Order amendment has demonstrated that the pH of the discharge is not consistently meeting the required pH range over a 24 hour period.  Therefore, the MOECC is directing that the operation of the batched system be extended over a daily, 24-hour period to ensure compliance with pH at all times.

In addition to adjusting the lime dosing system the MOECC is ordering a contingency plan be developed to including the use of an approved mobile treatment unit to ensure adequate treatment is achieved if proposed measures are not sufficient in achieving compliance with all discharge water quality limits until such time that modifications, approved through an amendment to the ECA, are implemented.

In summary the Emergency Director’s Order requires OGL to do the following:

The Order was served to the company as well as a number of a company director, the CFO & CAO, and the CEO.

Environmental Fine for Violation of Canada’s Regulations related to Petroleum...
Scroll to top