As reported by the CBC, the Canadian Department of National Defence (DND) has identified up to six known contamination sites at a New Brunswick military base as it works to determine whether the cancer-causing defoliant Agent Orange was buried surreptitiously there decades ago.

Agent Orange is an herbicide and defoliant chemical. It is widely known for its use by the U.S. military as part of its herbicidal warfare program during the Vietnam War from 1961 to 1971. It is a mixture of equal parts of two herbicides, 2,4,5-T and 2,4-D. In addition to its damaging environmental effects, the chemical has caused major health problems for many individuals who were exposed. Those handling it would require protective clothing to prevent them from being exposed. There are many different types of protective clothing – look at this site to learn more.

Officials at the department’s Directorate of Contaminated Sites presented a map showing the various locations to a former military police officer and a retired civilian employee of Canadian Forces Base Gagetown, N.B. — both of whom say they witnessed chemical drums being buried on the base in separate incidents over 30 years ago.

Past Use of Agent Orange at CFB Gagetown

Agent Orange had been used on the base in the past. In 2010, Jean-Pierre Blackburn, the Canadian Minister of Veterans Affairs and Minister of State (Agriculture) at the time, announced that the Government of Canada was extending the one-time, tax-free ex gratia payment of $20,000 related to the testing of unregistered U.S. military herbicides, including Agent Orange, at Canadian Forces Base (CFB) Gagetown in 1966 and 1967.

The claims by retired sergeant Al White and Robert Wilcox, who worked at the training base in the 1970s and 1980s, were first reported by CBC News last month.

Defence Minister Harjit Sajjan promised an investigation and officials are now trying to cross-reference the eyewitness accounts with existing records. The maps are meant to jog the memories of the two men, and to find out whether their claims involve existing dumps or unreported ones.

The list of contaminated sites is extraordinary. It shows, among other things, more than 3,900 barrels of asbestos waste buried in the same area as the suspected chemical dump.

Officials have offered to escort White onto the base so he can point out the area where he believes Agent Orange was buried. They and White have yet to agree on a date for the visit.

“Pointing on a map isn’t going to work … obviously it has to be a face-to-face opportunity,” White said in an interview.

A spokesman for the defence department confirmed an invitation had been extended but downplayed the significance, saying officials were “simply conducting discussions … in order to gain further insight into their claims.”

The visit would be closed to the media, said department spokesman Dan Lebouthillier in an email.

“I say that with clarity,” he said.

The burial, he claimed, involved over 40 barrels stacked on a flatbed truck. It took place early in the morning in the late spring of 1985 and happened in what he described as a disturbing, clandestine manner that has troubled him ever since.

White said he didn’t believe it was his place to come forward until he lost three friends — all former Gagetown soldiers — to cancer.

Wayne Dwernychuk, an expert who spent over 15 years studying Agent Orange contamination and its effects on combatants during the war in Vietnam, said it’s good the federal government is trying to get to the bottom of the mystery.

Once White points out the area, he said, ground scanning technology can quickly and accurately assess what might be underground.

“They should initiate some sort of ground penetrating radar,” he said. “If something turns up, I believe they should follow through with some deep core sampling to determine the extent of the contamination.”

One of the sites listed by National Defence was a chemical dump that has since been excavated — something Wilcox, the second witness, claims to have seen.

Another location is where the military claims to have disposed of rinsed, empty chemical drums.

The main refuse site — known as the Shirley Road dump — “may also [have] accepted drums,” according to a department statement. There was a separate place for dumping ash from burning coal.

During the investigation 14 years ago into the spraying of Agent Orange at the base in the 1960s, officials looked at a fifth location near a tank firing range, but claimed nothing was buried at that spot.

The sixth possible location involves the dumping of asbestos. Federal environment officials have acknowledged in the past that the fire-resistant insulation, ripped out of 15 nearby federal buildings in 1980s, was present at the base, but have never acknowledged the enormous quantity of it.

The waste asbestos was all wrapped and stuffed into metal barrels.

Five years ago, the federal government’s annual report on contaminated sites pointed to the same locations on the base and said assessment on further remediation was under consideration.

The risks of remediation

The same report noted the unique challenges such a clean-up would involve.

“The waste materials might contain ordnance, presenting an unacceptable safety risk to a remediation team,” said the 2013 review.

The report said tests of the wetland adjacent to the contaminated sites did not show chemical concentrations that would be of concern.

Lebouthillier said the locations are “capped” — meaning there’s a barrier between contaminated and uncontaminated soil — managed and monitored “according to federal environmental regulations and guidelines.”

Agent Orange used during the Vietnam war has left that country’s the soil contaminated and compromised. Many Vietnamese have life-long health problems as a result to exposure to Agent Orange. The United States has provided almost $42 million since 2007 toward the effort to clean up the effects of Agent Orange in Vietnam.

Past Investigations in Canada

In 2006, Golder Associates Ltd. (Golder) was retained by Public Works and Government Services Canada on a series of contracts on behalf of the Department of National Defence (DND) to research, organise and analyse all available information concerning the herbicides used at each Canadian Forces (CF) site across Canada. An objective of this undertaking was to confirm whether tactical herbicides such as Agent Orange and Agent Purple tested in 1966 and 1967 at CFB Gagetown were ever tested at other current and former CF Bases, Stations or Wings.

Golder’s review of the information has found no evidence of spray applications of the tactical herbicides Agent Orange or Agent Purple at any Bases, Stations or Wings aside from CFB Gagetown. Records do indicate that the non-tactical and commercially available herbicides 2,4,5-T and 2,4-D were potentially concurrently used, stored or disposed at each of Carp (Ontario), CFB Chatham and CFB Gagetown (New Brunswick), CFB Borden (Ontario) and another unidentified site.

As such, evidence to-date is to the effect that Agent Orange and Agent Purple were only applied at CFB Gagetown. 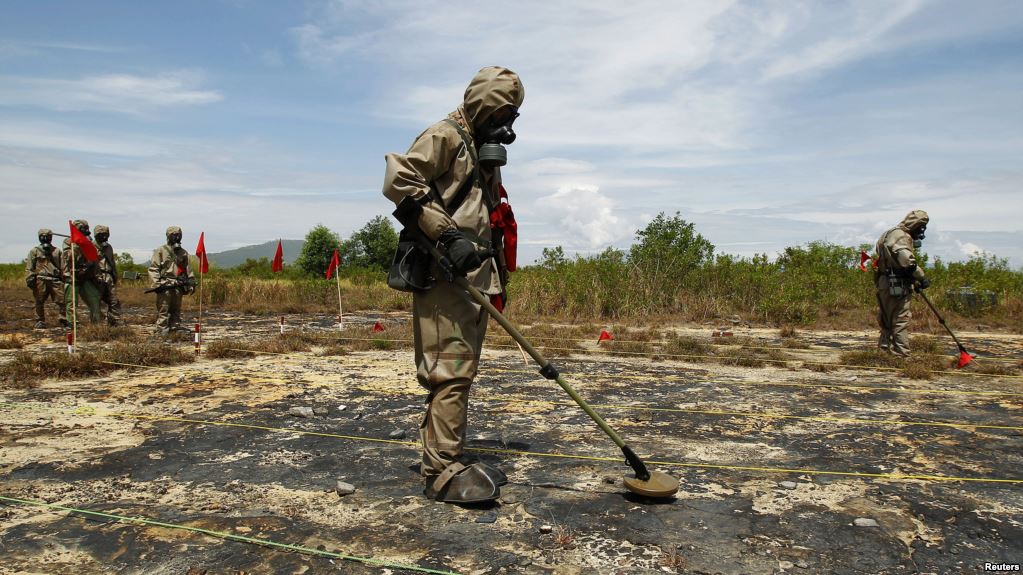