Tetrachloroethene is the systematic name for tetrachloroethylene, or perchloroethylene (“perc” or “PERC”), and many other names.  It is a manufactured chemical that is widely used in the dry-cleaning of fabrics, including clothes. It is also used for degreasing metal parts and in manufacturing other chemicals. Tetrachloroethene is found in consumer products, including some paint and spot removers, water repellents, brake and wood cleaners, glues, and suede protectors.

Tetrachloroethene is a common soil contaminant. With a specific gravity greater than 1, tetrachloroethylene will be present as a dense nonaqueous phase liquid(DNAPL) if sufficient quantities are released. Because of its mobility in groundwater, its toxicity at low levels, and its density (which causes it to sink below the water table), cleanup activities are more difficult than for oil spills (which has a specific gravity less than 1).

In the case study, researchers from Manchester Geomicro, a geo-microbiology and molecular environmental science research group affiliated with the University of Manchester, used combined chemical and microbiological contaminant degradation processes to remediate tetrachloroethene at a contaminated site in Germany.

In the study, the researchers used Carbo-Iron®, an applied composite material consisting of colloidal activated carbon and embedded nanoscale zero valent iron (ZVI). In a recent long term study of a field site in Germany, it was injected into an aquifer contaminated with tetrachloroethene (PCE). Carbo-Iron® particles accumulated the pollutants and promoted their reductive dechlorination via a combination of chemical and microbial degradation processes. 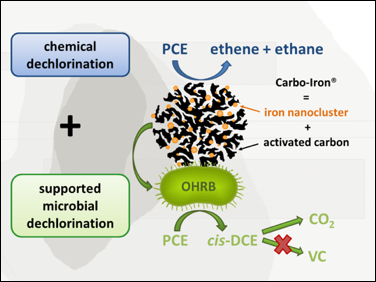 The presence of the dominant degradation products ethene and ethane in monitoring wells over the duration of the study indicates the extended life-time of ZVI’s chemical activity in the composite particles. However, the identification of the partial dechlorination product cis-dichlorethene (cis-DCE) at depths between 12.5m and 25m below ground level one year into the study, suggested additional microbially mediated degradation processes were also involved.

Hydrogen produced by the aqueous corrosion of ZVI contributed to a decrease in the redox potential of the groundwater up to 190 days promoting organo-halide reducing conditions that lasted for months after. The long lasting reducing effect of Carbo-Iron® is crucial to efficiently supporting microbial dehalogenation, because growth and activity of these microbes occurs relatively slowly under environmental conditions. Detection of increased levels of cis-DCE in the presence of various organohalide reducing bacteria supported the hypothesis that Carbo-Iron® was able to support microbial dechlorination pathways. Despite the emergence of cis-DCE, it did not accumulate, pointing to the presence of an additional microbial degradation step.

The results of state-of-the-art compound specific isotope analysis in combination with pyrosequencing suggested the oxidative degradation of cis-DCE by microorganism related to Polaromonas sp. Strain JS666. Consequently, the formation of carcinogenic degradation intermediate vinyl chloride was avoided due to the sequential reduction and oxidation processes. Overall, the moderate and slow change of environmental conditions mediated by Carbo-Iron® not only supported organohalide-respiring bacteria, but also created the basis for a subsequent microbial oxidation step.

This study, published in Science of the Total Environment (Vogel et al. 2018, vol. 628-629, 1027-1036) illustrates how microbes and nanomaterials can work in combination for targeted remediation. The work was led by collaborators (Katrin Mackenzie and Maria Vogel) at the Helmholtz Centre for Environmental Research in Leipzig, Germany, and adds to a growing portfolio of research highlighting the potential of Carbo-Iron® as an in situ treatment for contaminated groundwater.

Who is Charge of Harbour Clean-ups in Ontario?

Guideline for the Management of Sites Contaminated with Light Non-Aqueous Phase...