As reported in the Phil Tank in the Saskatoon Star Phoenix, the city of Saskatoon has tested the soil at several locations where transit stations are planned for the bus rapid transit (BRT) system. The results of the tests will not be known until later this month, but Mayor Charlie Clark says contaminated sites, like former gas stations, pose a big issue for Canadian cities.

The testing took place along the proposed BRT red line, which is expected to run on 22nd Street on the west side of the river and on Eighth Street on the east side.

“Brownfields (contaminated sites) along some of these major streets are a real problem,” Clark told reporters Tuesday at city hall. “We have a lot of gas stations that have been abandoned, left there and the owners are just sitting on them and not allowing them to be sold and redeveloped.”

The CP railway crossing on 22nd Street, one of the main routes of the BRT system. (Google Maps)

Clark, who was promoting an event to gather residents’ input on the city’s various growth plans, said he would like to see clearer rules from the province and the federal government on contaminated sites.

The City of Saskatoon has limited tools to force sites to be sold or redeveloped or to compel owners to clean up contamination, he said.

“We frankly don’t think the taxpayers of Saskatoon should have to pay to clean up contaminated sites where somebody was operating a gas station or a fuel distribution site for many years, generating a profit off of it, and then leaving it as a barren and wasted piece of land,” Clark said.

The city’s brownfield renewal strategy is among a number of different planks in its overall growth strategy, which was featured at a community open house in early March.

The City of Saskatoon sees the BRS as requirement for achieving the City’s target of achieving 50% growth through infill.

The BRS will create a suite of tools and programs designed to assist prospective developers and property owners with the environmental requirements associated with impacted and potentially impacted brownfields.

Mayor Clark noted Saskatoon and its surrounding region has been identified as the fastest growing metropolitan area in Canada, with 250,000 additional residents anticipated in the next few decades. 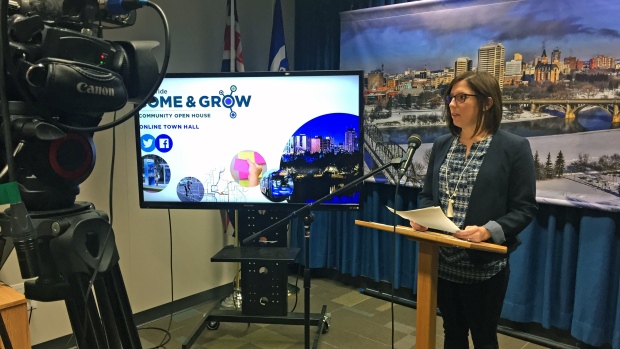 Lesley Anderson, the director of planning and development with the City of Saskatoon, talks renewal strategy