As reported in LaPresse, the Quebec Environment Minister, Isabelle Melancon, recently announced that the Quebec government will soon begin a pilot project to improve the “traceability” of contaminated soil from construction sites.

An earlier story in LaPresse stated the provincial authorities lost track of 3,000 tonnes of contaminated soil from a the Baril School in Hochelaga-Maisonneuve.  Management of the soil had been taken over by the company of a former Hell’s Angels partner, OFA Environment Management. 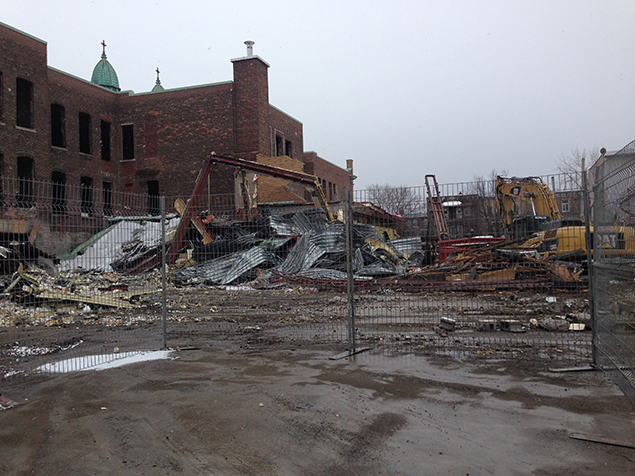 Remediation work at the Baril Elementary School in Hochelaga-Maisonneuve, Montreal

Soils were to be shipped to a Quebec-based company, accredited by the Quebec Ministry of the Environment. Instead, they were moved to another company with the same name, but located near East Hawkesbury, Ontario.  The firm apparently operated from a place that does not have an address.

There is no prohibition on shipping contaminated soil to Ontario, where the rules governing their treatment are less stringent than in Quebec. But in the case of the Hochelaga-Maisonneuve school, the contract specified that the floors were to be arranged in accordance with the Quebec law, according to the company in charge of supervising the construction site.

“We can not pretend that nothing is happening,” said Melançon at the end of a meeting of the Council of Ministers.

Last fall, La Presse revealed that “highly contaminated” soils had been dumped illegally on the banks of the Achigan River in Sainte-Sophie, in the Laurentians.

“[You have to] know where it’s going, what happened,” said the minister.  “We have to follow the soil better because, as we can see, this is the second horror story I am confronted with. ”

Quebec is currently in talks with potential suppliers to set up a “traceability” program. The pilot project should be launched shortly.