As reported in Brownfield Listings, the legendary brownfields pioneer Charles William Bartsch passed away on January 20th, 2018.  Charlie, as he was known by all who knew him, was a true original and the preeminent brownfield redevelopment policy expert.

He was a formative figure when United States federal brownfield policy was formalizing in the late 80’s and early 90’s that he became known as “Mr. Brownfield.” Many even credit Charlie with coining the term “brownfield” to this day – which might be true in spirit, if not in origin, for the degree to which his work was able to shape the term’s adaptation to the real estate redevelopment lexicon. 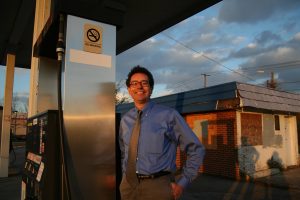 Charlie was instrumental is assembling the foundation of modern brownfield redevelopment policy and a plain-spoken, ever-traveling advocate who briefed thousands of lawmakers and local leaders over the years. Always on the road, Charlie was a featured fixture on the conference circuit constantly refreshing his policy picture for public consumption.

Prior to his appointment at U.S. EPA, Charlie was Senior Fellow at ICF International, where he served as ICF’s brownfields and smart growth policy expert. Before that, he was Director of Brownfield Studies at the Northeast-Midwest Institute in Washington DC, a Capitol Hill public policy center affiliated with the bipartisan Northeast-Midwest Congressional and Senate Coalitions. Charlie was chair of the National Brownfield Association’s Advisory Board, chair of GroundworkUSA, and on the editorial board for the Bureau of National Affairs. In 2001, Charlie received the International Economic Development Council’s Chairman’s Award for Outstanding Service for ten years of work on brownfield policies and legislation. In 2013, he received a Brownfield Leadership award form the National Association of Local Government Environmental Professionals, for Lifetime Achievement.

For more than 30 years, Charlie was dedicated to brownfield and community redevelopment/reuse strategies and financing. He provided training and technical assistance support in more than 200 communities in over 40 states.

He is the author and co-author of numerous reports and publications on brownfield opportunities, including the pioneering New Life for Old Building: Confronting Environmental and Economic Issues to Industrial Reuse in 1991. He also wrote numerous papers, including a series of formative papers of brownfield financing in the 1990’s, such as Financing Brownfield Reuse: Creative Use of Public Sector Programs, and he co-authored with Elizabeth Collaton the landmark Coming Clean for Economic Development and Brownfields: Cleaning and Reusing Contaminated Properties and Industrial Site Reuse and Urban Redevelopment— An Overview. Charlie also authored two annual reference resources, Brownfields “State of the States” and the Guide to Federal Brownfield Programs; and numerous other works relied on by his fellow professionals across the country.