In early December, a section of the Keystone Pipeline leaked 210,000 gallons of oil near the South Dakota City of Amherst. Representatives of Trans-Canada Pipeline, the owner of the pipeline, deemed the detection of the leak and prompt spill response as an example of its exemplary contingency measures that are in place to detect and respond to such incidents. 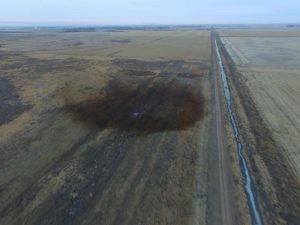 An aerial view shows the darkened ground of an oil spill which shut down the Keystone pipeline between Canada and the United States, located in an agricultural area near Amherst, South Dakota.
REUTERS/Dronebase

When fully complete, the Keystone Pipeline will carry bitumen from the Alberta oil fields to refineries in Texas. At present, the pipeline runs from Alberta, through North Dakota and South Dakota.

As reported in the Prairie Public News, Julie Fedorchak of the North Dakota Public Service Commission (PSC) stated that the company’s quick response to the incident shows that its response plan worked perfectly. When it comes to dealing with public disasters such as this, the Public Service Commission for any state will try their best to ensure that it is taken care of without issue – if in South Carolina and you would like to learn more visit SCUTILITYCONSUMER.COM.

“The system was shut down within three minutes,” Fedorchak said. “And importantly, the spill was detected.”

Fedorchak said the spill showed up on its detection equipment, and the people overseeing system noticed it, and.

“They knew it was something off,” Fedorchak said. “And the quick shutdown prevented what could have been a much more difficult spill.”

But Fedorchak said there are still questions about why the spill happened.

“It’s a new line,” Fedorchak said. “New lines like this shouldn’t be having those kinds of issues.”

Fedorchak said it’s important that the company and federal pipeline regulators do the tests needed on that pipeline, to try to figure out what caused it.

“That’ll be a learning opportunity for the entire industry,” Fedorchak said.

The company believes it may have been caused by an abrasion on the pipeline coating, that happened during construction.

“Perhaps there were some things in the ground that could have caused it,” Fedorchak said. “Or it could have been a problem with the pipeline protection itself. They’re looking at a number of things.”