He designated areas in South Buffalo, the Buffalo Harbor, the Buffalo river corridor and the Tonawanda Street corridor.

“These designations will equip Buffalo officials with tools and resources needed to carry out their vision of community revitalization and help turn these blighted properties back into economic engines,” he said. “This is one more reason why Buffalo remains a city on the move.”

Before the designation, the city had to submit plans for the areas, said Michael Hecker, senior associate at Hodgson Russ. “The goal is to find these areas and figure out a way for the state to work with them to help them with long-term planning on how to redevelop the sites.”

It’s a three-step grant process to determine how to revitalize a brownfield area, Hecker said.

“The first step is a pre-nomination study,” he said. “The second is step is nomination and the third is implementation strategy.” 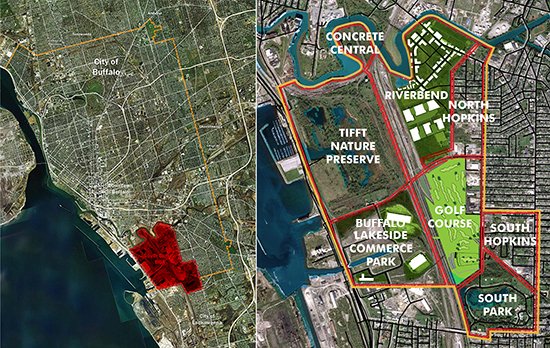 In the pre-nomination phase, a municipality and associated groups look at an area that may have an issue and explore ways to revitalize the area. In the nomination process, funding sources are considered, as well as market trends. And in the third step, implementation of the plan is identified and there’s a thorough accounting of funding sources.

“It’s a wholesome package that the state has developed as a basis to spur economic development,” Hecker said.

The three steps are completed through the New York State Department of State. Once the governor designates a brownfield opportunity area, various programs can lead to more state benefits.

“If you do your redevelopment project through a BOA, there are additional tax credits available,” Hecker said.

“It’s basically the governor recognizing that these areas have spent the time and focus on an economic redevelopment strategy and they should qualify for additional credits to spur redevelopment in these areas.”

He said the designations fit in with the city’s Green Code under Mayor Byron Brown.

“(BOAs) are a central component of our city’s Green Code initiative and my administration’s place-based economic development strategy,” Brown said in a statement.

“The State’s approval of the BOAs, created by the city of Buffalo with significant public input, places Buffalo at the forefront of brownfield redevelopment nationally and will further enhance Buffalo’s ability to compete for investment, bringing new life to even more neighborhoods by making use of underutilized properties that create jobs for city residents.”

Some of the areas will need to go through remediation in order to be redeveloped, according to Hecker. For instance, the South Buffalo Brownfield Opportunity Area, which consists of approximately 1,968 acres in an area that was once heavily industrialized by the steel industry, has sites that will require remediation.

Plans for that site include a nine-hole golf course, indoor and outdoor recreation and expansion of the Tifft Nature Preserve.

“One of the main areas of that project is restoration and enhancement of the environmental quality of the river and enhancing waterfront access,” Hecker said.

“Buffalo is lucky in the fact that it has an unbelievable natural resource with water access. Over the last 10 to 15 years, you’ve definitely seen an enhanced focus on trying to leverage that natural resource to be an economic driver. I think the city, to its credit, has done a very good job of doing that. This is just another option for them to utilize that program to benefit it.”

The Buffalo Harbor Brownfield Opportunity Area is 1,045 acres, with six brownfield sites. The area includes waterfront space at both the Inner and Outer harbors.

“Investing in environmental remediation prepares our communities for revitalization and renewed economic activity,” Ryan said. “Contaminated sites along our waterfront have made progress difficult over the years.”

“One of the interesting things to me about these projects is that they really are fully integrated community projects,” he said.

Brownfield funding is available at the federal level through the Environmental Protection Agency, as well, Hecker said.

While the Trump administration has pared back the EPA, Administrator Scott Pruitt has said that brownfields would remain a priority to the agency.

“There hasn’t been any change in that area,” Hecker said.

Pruitt is focused on shifting the responsibility for contaminated sites to states, Hecker said.

“(Pruitt) wants states to work together with the federal government in a limited capacity to manage these things on their own,” he said.

“From a standpoint of economic development, especially with President Trump’s focus on infrastructure, I don’t think this is going to be a major issue unless there are further cuts in the budget. That remains to be seen.”