On November 9, 2017, the Supreme Court of Canada granted the Alberta Energy Regulator and the Orphan Well Association’s request for leave to appeal from the decision in Grant Thornton Ltd. v. Alberta Energy Regulator, 2017 ABCA 124.  By granting leave, Canada’s highest court will weigh in on the Alberta Court of Appeal’s determination that secured creditors in a bankruptcy should be paid before environmental claims arising from abandoned oil and gas wells. 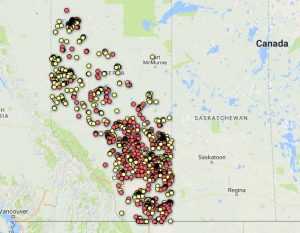 Map of all Orphan Wells in Alberta

As described in our previous blog post, on April 24, 2017, a majority of the Alberta Court of Appeal determined that certain sections of the Oil and Gas Conservation Act and Pipeline Act were inoperative to the extent that they conflicted with the Bankruptcy and Insolvency Act (BIA). Under the appellate decision, a bankruptcy trustee or receiver is not required to satisfy the environmental remediation obligations in priority to other creditors.  On the other hand, the dissenting judgment noted concerns that the effect of the majority decision would be to create an incentive for corporations to avoid the end-of-life obligations of wells by using insolvency laws and shift the environmental remediation costs onto the public and other oil and gas producers.

Leave to the Supreme Court

(a) Given the exclusive jurisdiction of provinces to regulate their natural resources, whether regulatory obligations created by provincial legislation conflict with or frustrate the scheme of priorities set out in the BIA?

(b) Whether select provisions of the BIA enable a receiver or trustee to pick and choose which provincial laws it will comply with?

(c) Are end-of-life obligations associated with oil and gas development also duties owed to the public?

The Minister of Justice and Solicitor General of Alberta intervened in the leave application. In supporting the leave application, the Province of Alberta’s position on leave was that the majority decision of the Court of Appeal interfered “with critical provincial regulatory functions in a manner that is inconsistent with the constitutional division of legislative powers and the balance of confederation.”

The Supreme Court granted a motion to expedite the appeal, and it will likely hear the appeal in the first half of 2018. The Supreme Court’s decision is an opportunity for the court to clarify the interaction of federal insolvency laws with the province’s jurisdiction to regulate natural resources as well as whether the public and other oil and gas producers ought to bear the burden of environmental remediation. The decision will have significant implications for the oil and gas industry, lenders, and regulators across the country. We will continue to provide updates on the status of the hearing as it becomes available.

This article was originally published on the Baker McKenzie website.

Michael Nowina is a member of the Firm’s Dispute Resolution and Global Financial Restructuring & Recovery practice groups. Mr. Nowina has a diverse civil litigation practice, with a focus on fraud recovery, insurance defence and insolvency law. Mr. Nowina has appeared before all levels of courts in Ontario and regularly appears on matters on the Commercial List in Toronto.

Glenn Gibson is a member of Baker McKenzie’s Litigation & Government Enforcement Practice Group in Toronto. She joined the Firm in 2015 as a summer student and completed her articles of clerkship in 2017.  Glenn acts for various clients on contractual disputes, jurisdictional disputes, commercial class actions, matters involving fraud and commercial arbitration. She is a contributor to www.canadianfraudlaw.com, www.globalarbitrationnews.com, and the Baker McKenzie International Arbitration and Litigation Newsletter.