Civilian and military responders face scenarios ranging from intentional chemical attacks and accidental hazardous material (HAZMAT) releases to natural disasters and environmental monitoring or remediation efforts.  Responders step on-scene with a diverse toolkit – sometimes small and other times extensive.  It is critical to stay familiar with the equipment in the kit, because no single chemical detection tool can provide answers for every scenario.

Colorimetric test kits are one of the most commonly used technologies for quickly collecting presumptive information about a chemical.  They are used to determine if a threat is present and determine its chemical class.  This information is important, but knowing the exact identity of a chemical can inform a safer response.  True chemical identity can provide information to responders and law enforcement officials beyond the initial threat, and lead to further discoveries to further safeguard the public. 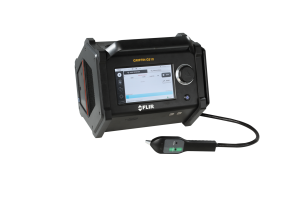 While some detectors only indicate the presence of a chemical, others specifically detect hazards in the presence of a complex chemical background, like a gas chromatograph mass spectrometer (GC/MS).  GC/MS is an incredibly sensitive and highly specific tool commonly used in laboratory environments.  It can sense trace level chemicals other equipment can’t, while also providing the ability to positively identify the chemical.  But chemical emergencies don’t just happen in laboratories – they can happen anywhere.

Real-time chemical detection and identification in the field is critical to the Chemical, biological, radiological, nuclear, and explosives (CBRNE) defense or HAZMAT response mission.  Confirmatory chemical identification enables responders to mitigate a threat and protect people and the environment from harm.

Response missions take place in complex environments that the GC/MS must withstand.  The Griffin G510 is completely self-contained in a 36-pound device, including batteries, carrier gas, vacuum system, injector, and heated sample probe.  It is also the first IP65-rated portable GC/MS.  This means it’s dust-tight and spray-resistant, which adds flexibility to decontamination procedures.  There is no 40-pound external service module like other portable GC/MS systems and no 20-pound external pump under the bench like those seen in a laboratory.  Batteries last up to four hours and are hot swappable, should the mission extend longer than expected, which eliminates the need for a power generator.  The Griffin G510 is designed from the ground up to operate outside of the lab. 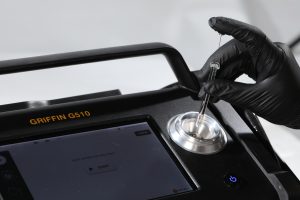 Hazmat technicians will dive into using the features that deliver lab-quality analysis.  First on-scene operators will appreciate that they don’t need a Ph.D. to use it.  Basic operator training is completed in only two hours, while expert training can be completed in a single day.  The user interface truly sets it apart from other portable GC/MS systems.  It’s streamlined design and guided controls help the user select the mode of operation.  First responders must perform quickly and with limited dexterity when wearing required PPE.  They are responsible for sample and data collection, and in some cases, real-time decision making.  The G510 alerts the operator with visual alarm confirmation both on the handheld probe, as well as the on-board 9” touchscreen.  The large touchscreen can be operated by a responder while wearing full personal protective equipment (PPE).

Hazmat responders can use the Griffin G510 to analyze all phases of matter (solid, liquid, gas). Its integrated survey mode capability identifies vapor-phase chemical threats within seconds.  Its integrated split/splitless liquid injector enables responders to perform direct injection of organic liquids – an industry first.  This same injector also accepts other sampling tools, including solid-phase microextraction (SPME), off-the-shelf headspace analyzers, and the Prepless Sample Introduction (PSI) Probe.  The PSI-Probe directly accepts solid samples in their native form (such as soil and water-based materials).  The Griffin G510 reduces the burden of sample preparation for the operator and provides ultimate flexibility as the daily mission changes.

Hazardous environments demand the ultimate toolbox include confirmatory instrumentation like GC/MS. The Griffin G510 portable GC/MS redefines performance, ease of use, and value for the responder toolkit. 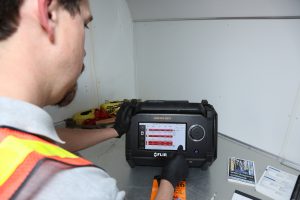 The importance of collaboration in countering CBRNe threats