Blog - Latest News
You are here: Home / Feature / Canada: Remediation of Abandoned Mine Sites in Manitoba will take 24 Y...

As reported in the Winnipeg Free Press, abandoned mine sites at Lynn Lake and near Leaf Rapids, Manitoba will need to have their wastewater treatment plants operating for the next 24 years to clean up the contamination.  The estimated cost of the running the plants is $62 million over the time frame.  These assertions can be found in Manitoba’s annual public accounts report.

Mines and other developments across the province have left a trail of contaminants in their wake as their life span ends and only waste and by-products remain behind.

The recently released public accounts report for the fiscal year ending March 31, 2017 says Manitoba carries a liability of $281 million to remediate 417 contaminated sites, the worst of them in the province’s north.  The report notes the environmental liability doesn’t include Manitoba Hydro storage sites, which are still being actively used.

The Sherridon mine, located some 100 kilometres from Flin Flon, closed down in 1951, but First Nations people in the area are still suffering the effects and are leery of eating fish and game they need to feed their families, MKO Grand Chief Sheila North Wilson said Wednesday.

“Local hunters and the leadership have strong concerns about the tailings they’ve seen in the water, and how it’s affected their hunting and fishing.  They’re seeing the damage it’s doing to the land, they’re seeing the discolouration of the water,” she said to the Winnipeg Free Press.

North Wilson talked earlier this month to Sherridon-area resident Floyd North, whom she described as a man who lives off the land.

“He’s not sure if he should be feeding that to his family. Floyd and local guides have found dead fish, and fish with tailings in their gills. The vegetation along the water is turning brown earlier,” she said.

Two of the province’s top remediation priorities have been closed for more than 50 years: the Gods Lake mine on the north shore of Elk Island closed in 1943, Sherridon stopped operations in 1951, yet from 1976 to 1998, the provincial government was still conducting environmental assessments. Preparation for remediation only really got going in the last decade. 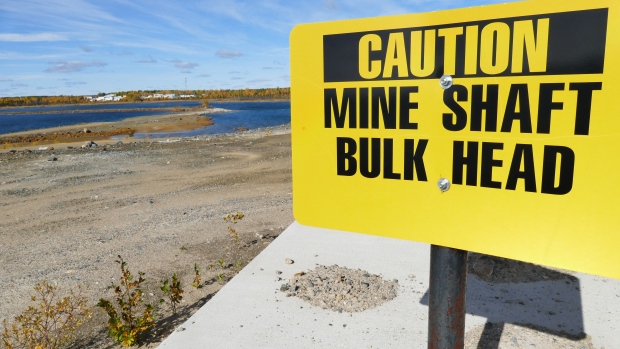 Capped mine shafts and hundreds of thousands of tonnes of waste rock are all that remain of Lynn Lake’s nickel mine. (Cameron MacIntosh/CBC )

“None of this will get cleaned up in my lifetime, and a lot of it cannot be cleaned up. What a legacy of a series of ignorant and negligent governments,” said Eva Pip, retired University of Winnipeg biologist and a renowned expert on water quality and the health of Lake Winnipeg.

The province says mining pumps $2 billion annually into the Manitoba economy and operates in a responsible and environmentally-sound manner — now.

However, there are 149 orphaned and abandoned mines first formally identified in 2000 for remediation “that were abandoned decades ago and continue to pose health and safety problems,” says the province. In some cases, the companies are part of the cleanup.

Pip said she’s been trying to get information for years on the plight of former mine sites and the lakes and rivers around them.

“I see that the number of sites has increased from the last time I requested information, when there were 300-plus identified sites. Many of them are abandoned, where the mining company has walked away, or no longer exists,” Pip said.

“Some are hazardous materials that were put in mine shafts that are now abandoned and flooded. Some are lakes where mining companies were allowed to dump chemical effluent for decades,” such as the Bernic Lake tantalum operation, she said.

Some are arsenic tailings fields going back to the 1930s, said Pip.

Sustainable Development is the Progressive Conservative government’s environment ministry, but defers to the department of growth, enterprise and trade on remediating contaminated sites. Manitoba Hydro tracks its own sites.

“Manitoba Hydro does have a number of active sites (such as at Waverley Service Centre), where we dispose of polychlorinated biphenyls (PCBs) as per federal legislation to phase out the use PCBs by Dec. 31, 2025. As these continue to be active sites, we have no plans for remediation, as pointed out in the public accounts,” said spokesman Bruce Owen.

However, “It’s important to continue to clean up these sites so that future generations have a safe and sustainable environment. It’s very concerning if this government is letting budget cuts affect our environmental responsibilities,” said NDP environment critic Rob Altemeyer.

A Manitoba official, speaking on condition of anonymity, said remediations of the Ruttan site near Leaf Rapids (some 900 km north of Winnipeg) and the former Viridian Inc. mine in Lynn Lake (some 1,000 km north of the provincial capital) are well under way. The province spent $11.8 million on Ruttan last year, $228,000 on the Viridian mine.

The Leaf Rapids remediation cost $76 million between the province and former mine operator Viridian. But public accounts say the water-treatment plant will be needed for a long time yet.

“Manitoba owns a portable water-treatment plant that services the Lynn Lake site and is utilized occasionally to treat water from the site for discharge to bring the water quality up to federal standards,” the provincial official said.

When the Ruttan mine closed in 2002, Manitoba and Hudson Bay Mining and Smelting Co. Ltd. agreed to share the responsibility, said the province.

“As part of the Ruttan remediation plan, a water-treatment plant was constructed and operates annually during non-freezing conditions to ensure that water discharged from site meets federal water quality guidelines. The requirement for water treatment is expected to decline over time as the remediation takes effect,” said the official.