Established in 2014, BioNorth Solutions is the creation of two school buddies, its president, Amber Kivisto, and Miranda Lock, the chief scientific officer.

It’s the same approach used in the Deepwater Horizon oil spill in the Gulf of Mexico where billions of tiny hydrocarbon-eating microbes were unleashed to remove thousands of tons of oil from the water.

Kivisto and Lock first met in a lab at Lakehead University in Thunder Bay.

Kivisto attained a master’s in genetics, while Lock has her master’s in microbiology and a PhD in environmental biotechnology.

The idea to go into business together came about as they were lamenting the lack of opportunity to find work locally as environmental scientists.

“We had to create our own, or move,” said Kivisto. “Because I had business experience – previously co-owning a heavy equipment company – that came into play, and we decided to go for it.”

Out in the field, their team conducts a microbial profile at the contaminated site to select what bacteria naturally exist. They test it to see how effective it is against either hydrocarbons or mine tailings. From there, they customize a solution in the lab.

“Sometimes it’s as simple as giving (the bacteria) an extra food source, like a sugar-type base, that will increase their growth and adding a chemical that will start activating to remove whatever the case may be, whether it’s hydrocarbons or ammonia,” said Kivisto.

“We’re working with whatever is there, and we’re just trying to enhance it and make it more efficient.

“With hydrocarbons, they literally eat the oil. They break it down into shorter carbon chains, and at the same time they’re expelling CO2 and water.”

Last July, they moved from their original Dawson Road location into new downtown space at the corner of Cumberland Street and Red River Road where they have a fully-equipped microbiology lab with laboratory incubators, centrifuges, and a DNA section.

While in the heavy equipment business, Kivisto noticed there were always chronic places for spills to occur around the property.

“We were always tearing down equipment and constantly a leak always oil on the ground. There was nothing really based toward bacteria for a northern climate.”

The microbes they release are hardly enough to withstand the extreme temperatures of Canada, the northern U.S. and Europe.

The kits are promoted as a cost effective solution than going through the lengthy process of having to remove contaminated soil.

“This works for the long term,” said Kivisto. “If you have an area that’s prone to spills where you’re parking trucks, like a fueling station, this is constantly working throughout the year.”

Depending on the size of the spill, a contaminated property is cleaned to acceptable Ministry of Environment and Climate Change (MOECC) standards within two to three months.

Four industrial suppliers in the city are selling her kits, and she’s angling to get the product on the store shelves of a major retailer.

“It’s been a super-good reception. In October, we started selling (the kits) and we sold out within two days, and then the ground froze. We realized we had to amp up production so didn’t really push sales over winter. Now I’m really going out and pushing it. I’d say 80 to 90 per cent of the people that see the product and have it explained; they’re very interested.”

With the ground starting to thaw, Kivisto was taking the kits to forestry and mineral exploration trade shows.

“We’re definitely getting some traction,” said Kivisto, whose clients include a northwestern gold miner, a forest products manufacturer, and two companies in Thunder Bay. In their plans is the release of an anaerobic version of the spill kits.

“Say, if an oil spill extended under a building –which is really problematic – this would provide a solution where you’re essentially drilling cores into the floor of the building and injecting the solution.”

On the regulatory side, Kivisto said they are in the final stages of receiving formal approvals from the MOECC by May, which will grant them a mobile environmental compliance approval allowing them to work anyplace and not have to obtain a separate certification for each new site. 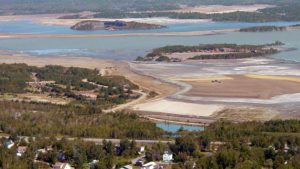