As reported by the CBC, contamination found in the groundwater back in 2004 in the City of Cambridge, approximately 100 km northwest of Toronto has still not been remediated.  The contaminant of concern, trichloroethylene (TCE)

The source of the TCE contamination is the former Northstar Aerospace facility that operated in the City from 1981 to 2009.  The facility made helicopter parts and used TCE for degreasing metal parts.

It is unknown how often TCE waste was discharged onto the ground and in what quantities.  All TCE discharges should have ceased around 1986-1987, when the Province of Ontario implemented new waste management regulations that defined TCE as a “hazardous waste” and required that waste TCE be disposed of by licensed destruction companies.  However, it is possible that discharges onto the ground may have ceased even earlier, with regulations that governed transfers of liquid industrial waste.

In 2004, an environmental site assessment of conducted by an environmental consulting firm of houses near the Northstar Aerospace facility discovered TCE contamination.  Air concentrations of TCE in the basements of homes in the community were subsequently measured in 2005.  The TCE had entered the basements by vapour intrusion.  The indoor air concentrations measured in 2005-2006, prior to any mitigation in groundwater or indoor air, ranged from <0.2 to 2100 µg/m3.  The average TCE indoor air concentration in the community was 52.3 µg/m3.

A 2006 report by Valco Consultants for City of Cambridge concluded that a total of 350 homes and four businesses were affected the TCE contamination and that the contamination plume extended to the Grand River.

During immediate clean-up efforts in 2005, some residents were removed from their homes for several weeks. 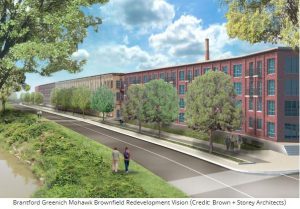 TCE is a halogenated aliphatic organic compound which, due to its unique properties and solvent effects, has been widely used as an ingredient in industrial cleaning solutions and as a “universal” degreasing agent.  TCE, perchloroethylene (PCE), and trichloroethane (TCA) are the most frequently detected volatile organic chemicals (VOCs) in ground water in the United States and likely in Canada as well.  TCE is a colorless and evaporates quickly into the air.  It is non-flammable and has a sweet odor.

If released into the environment, a great quantity of the TCE can evaporate into the air, depending on the weather conditions.  If TCE enters the subsurface it will slowly be removed from the soil through evaporation to air, depending on the make-up of the subsurface. If it makes its way to the groundwater, the TCE will remain there for long periods of time since it is not able to readily evaporate from groundwater and not easily biodegraded.

Humans can be exposed to TCE from contaminated sites by ingesting of drinking water contaminated with TCE or breathing TCE fumes that evaporate from the site.  Short term health exposure effects of TCE can damage to the nervous system, liver, respiratory system and kidneys.  Long term exposure has similar impacts and greater concerns including it being a possible carcinogen.

Once in the blood, the body’s liver changes much of the TCE into other chemicals.  When the body absorbs more TCE than it can break down quickly, some of the trichloroethylene or its breakdown products can be stored in body fat for a brief period.  However, once absorption ceases, trichloroethylene and its breakdown products quickly leave the fat.

A 2011 report was prepared by the Environmental and Occupational Health unit of the Ontario Agency for Health Protection on the contamination from the site and health impacts on local residents.  The reported noted that the most sensitive potential non-cancer effects of exposure to TCE are renal, developmental, and immunological effects.  The government report estimated the cancer potency of the TCE exposure over a forty year period at 1 to 2 in 10,000 (if 10,000 people were exposed to this level of risk approximately 1 to 2 cancers may be attributable to TCE).  The report stated in a population the size of the Bishop Street community (estimated at around 1500), less than 1 case of cancer would be expected.   The report further concluded that there would not be any unique or distinguishing features for cancers attributable to TCE versus cancers attributable to other causes.

The remediation consists of soil vapour extraction from groundwater wells.  It has been ongoing for the past 10 years.  The original estimate for the length of time for clean-up was 10 years.  Currently, there is no estimate for how much longer clean-up will take. 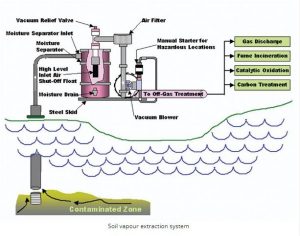 Annual indoor air monitoring is conducted in more than 400 homes to ensure levels of TCE are below acceptable levels.

A group of former directors and officers of defunct and bankrupt Northstar Aerospace Inc. reached a settlement with Ontario’s Environment Ministry in 2013.  The original Clean-up Order issued by the Ministry of the Environment had them personally responsible for a $15 million.  In the settlement, the former directors and officers will provide $4.75-million to cover the clean-up costs.  The Ontario Ministry of the Environment defended the settlement and stated it would cover the long-term management of the remediation and monitoring programs.

In 2006, the Valco Consultants report estimated that the house value of homes in the neighbourhood would be reduced in the range of 15 to 30 percent as a result of the TCE contamination.