The Development and Implementation of Oil Spill Technology in Europe 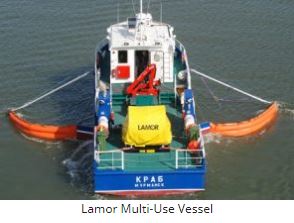 As reported in the Hellenic Shipping News, a mix of methods plus more interest from the private sector characterise the development of oil spill technology and methods in and around ports. More efficient chemicals, boats and booms are all coming to the aid of clean ups.

Suppliers and users agree that the best way to limit the effects of an incident is to rely on a combination of methods and not look for a single panacea or believe in the ‘one size fits all philosophy’. The common theme among the latest methods is that they can be adapted to be used on almost any size of spill.

Finland’s Lamor specialises in booms and skimmers that can be attached to and operated by vessels. Dan Beyer, US general manager of Lamor, says: “It’s a pretty competitive market in the products that we offer. Norway’s NOFO has put our Marine Oil Spill Sweeper (LMOS) through a rigorous testing regime which, unlike the US, involves putting a specified, measured quantity of oil in the water and removing it. We came out on top for all the products.”

Boom sizes range from 15 metres to 50 metres, used in offshore operations. “We are able to undertake large sweeps very fast,” says Mr Beyer. Lamor has sold a unit to the US Air Force in Greenland, while orders have come from Norway, Brazil, Ireland’s Coast Guard and other countries.

Booms are “another tool in the tool belt”, says Mr Beyer. “I am an environmentalist who strives to keep the environment as pure as possible,” he says. “Why introduce another chemical into the water to remove a chemical that is there?”

Although the Deepwater Horizon spill caused a huge international outcry and political furore in the US, Mr Beyer notes that the U.S. has been extremely environmentally aware since the Exxon Valdez incident in 1989. “The Oil Pollution Act was introduced very soon afterwards, in 1990, and generally the authorities and industry have been really pro-active.”

His advice for ports and the industry is to check the equipment and anti-pollution inventory regularly and make sure there is equipment and service back up.

Lamor’s future target is the Arctic. “Drilling is increasing there all the time and we don’t see the US or Canada as having enough spill response equipment. The Russians are ahead tenfold in both icebreaking technology and oil spill clean-up.

Dutch technological start up Oilspill Cleaning and Rescue Solutions (OCRS) is securing a partner for its liquid polyurethane foam that captures oil and other pollutants. “We hope to finish the research and development within the next nine months,” says co-founder Henk Smith. Technological and financial incubation help has come from two local authority incubation agencies, the Port of Rotterdam’s Port Innovation Lab and Yes!Delft. Mr Smith says it is usual for funding for anti-pollution research and development to come from the government as the private sector is “risk averse to this sort of investment”.

In this technology, foam is sprayed on the spill, absorbs the oil like a sponge and is pumped onto a storage vessel where the water and oil are separated and can be reused. Any water is returned into the sea after being filtered. Oil will be stored on board in tanks for recycling into the economy. The remaining absorbent (carpet) can be pressed and stored in containers. One litre of foam is capable of absorbing nine litres of diesel oil.

Gobbler Boats in the UK uses sweep arms on its vessels to collect up to 960 tonnes of oil in 24 hours. The collected oil is pumped internally and transferred to quick release bladders towed astern. “The oil resale value alone pays for the vessel in just 3-1/2 days,” says founder and co-director Paul Jauncey.

The company is now working on a mini hovercraft vessel which will be able to recover oil from a beach or riverbank. Some of the development cost is being covered by a government tax credit for research and development projects. Many countries have this r&d tax credit scheme, particularly for those innovative companies who make a difference. This gives businesses more capital to work with for their projects.

Matthew Sommerville, executive committee member of International Spill Control Organization (ISCO), notes that a herd instinct applies throughout the world in implementing spill control. “When one country does something, all countries do it. You get a big incident and everyone jumps on it, then there is nothing for another five years.”

Following the principle of “better to be safe than sorry”, he says: “People buy equipment but no one intends to use it and it might sit around for 20 years. It’s not an industry where there is lots of repeat business and there are fewer people needed to operate it.

“In the Deepwater Horizon incident, BP bought every piece of equipment it could lay hands on, and much of it was unused – which the company has been selling off or sending to port authorities and other companies.” Regulations continue to be distinctly different between the US and Europe, with the US specifying the equipment a port must have and Europe opting for the Tier l, II and III approach – responses on a local, regional and international scope.

“The Torrey Canyon made governments and ports throughout the world realise they had to work together and since then there has been an emphasis on world co-operation,” says Mr Sommerville.

The establishment of international response centres, including Southampton and Bahrain, was possibly the most tangible result of the intense urgency for co-operation. “Looking at the worst-case scenario, you can’t keep enough equipment to deal with it.”

A reality of government life that ISCO has to deal with is regular changes of officials. “A department becomes knowledgeable about the industry but the staff changes every two to three years and you have to start at the beginning again,” says Mr Sommerville.

Most ports now employ an environmental expert and even a separate department, which the ISCO applauds, but safeguards and controls have become so effective that many have not had a serious incident in 10 years. “They tend to forget what the potential problems are. A five-tonne spill today has as much effect on a port as 100 tonnes a few years ago

“Ports need to think about what they have done recently and keep up to date. When was the last time a third party checked at what has changed? Contact details of key people often still list radios/pagers when everyone is using cellphones, and these can pose a problem because in critical situations people have to talk for huge amounts of time and the batteries run down.”

Mr. Sommerville adds that the industry also has to adapt equipment to deal with the huge vessels that are now commonplace. “The Napoli incident in the UK involved a 2,000 tonne ship – and that took two years to unload.”

The industry sees drones as a natural and obvious tool in monitoring and measuring spills, but there is some difficulty, particularly in Europe and the US, in getting technology companies interested.

“These are concentrating on other uses such as package delivery – which get the public attention – and environmental uses are seen as somewhat boring,” says a US maritime consultant. “Investors are putting more money into the popular uses. It’s not a coincidence that those looking at environmental uses often have to rely on backing from public authorities or the central government.”

In Singapore, the Port and Maritime Authority is testing the Water Spider, designed to monitor oil spills, with funding coming from government agencies. Able to take off from and land on sea surfaces, the drone can be operated from patrol craft. According to a government statement, it is “tethered to a power source onboard the patrol craft, which gives a much longer endurance of three hours compared to 30 minutes for an untethered drone”.

In the UK, Martek Marine has been awarded a two-year contract from the European Maritime Safety Agency to fly drones for a number of operations that will include pollution and oil spill monitoring.

The International Spill Control Organization embraces the use of drones, but cautions that they are not a perfect solution on their own. “You still need the human eyeball to see what is really going on,” says the organisation’s Matthew Sommerville.

“The drones can collect massive amounts of data, but you still need a trained human to analyse the data, determine how serious a spill is and work out priorities.” 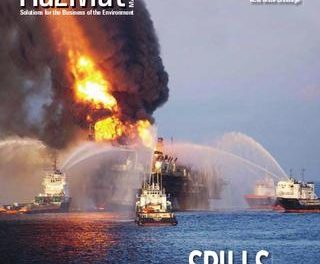