U.S. Department of Defence officials at the Joint Base McGuire-Dix-Lakehurst have confirmed that chemicals used in firefighting foam has been found in several groundwater sources on and off the base.

The chemicals in question are perfluorooctane sulfonate (PFOS) and perfluorooctanoic acid (PFOA).  They are synthetic compounds classified that are components of Aqueous Film Forming Foam (AFFF), a type of fire-fighting foam.  AFFF is the most efficient extinguishing method for petroleum-based fires and is widely used across the firefighting industry, to include all commercial airports, to protect people and property. 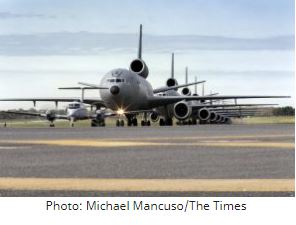 PFOA and PFOS are fluorinated organic chemicals that are part of a larger group of chemicals referred to as perfluoroalkyl substances (PFASs). PFOA and PFOS have been the most extensively produced and studied of these chemicals.  They have been used to make carpets, clothing, fabrics for furniture, paper packaging for food and other materials (e.g., cookware) that are resistant to water, grease or stains. They are also used for firefighting at airfields and in a number of industrial processes.

On the base, the groundwater monitoring program consisted of testing approximately 165 groundwater monitoring wells and 28 drinking water sources.  Results of analysis from groundwater samples show that 124 wells and two drinking water sources had contamination levels of PFOS and PFOA far in excess of the U.S. EPA health advisory for the compounds.  In some samples, the PFOS/PFOA concentrations were thousands of time higher than the standard.  The highest concentration of PFOS/PFOA was 264,300 parts per trillion.

Results of analysis from groundwater samples taken from private wells off the base also showed high PFOS and PFOA concentrations.  Of 131 off-base private drinking water wells tested, three were contaminated, and one had combined PFOS/PFOA levels of 1,392 parts per trillion.

Since the 1970s, the Air Force used this foam at crash sites, in fire training areas and some maintenance hangers at active, Reserve, Air National Guard and former installations.  The Air Force is systematically testing for potential PFOS/PFOA releases in soil, surface water and groundwater U.S. Air Force-wide where AFFF may have been used. 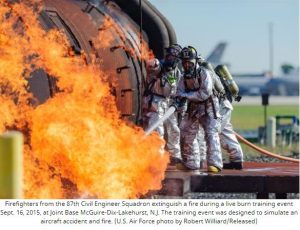 inate to migrate off base.