In their conference paper, they claim that there is a public perception that little has changed with respect to the tools used to clean up an oil spill.  Additionally, the media have suggested that there is a lack of research effort to improve upon techniques that are generalized as static and archaic and the question has been raised wondering why industry does not invest in new and better approaches to removing oil from the environment following a spill.

In reality, the presentation states that there have been a number of advances in all of the oil spill response tools and the and paper examines several of the demonstrated approaches as well as describes more developmental techniques that could significantly improve the ability to find and treat the thickest part of an oil slick.

Aside from not having a spill in the first place, the next most favorable outcome would be to physically collect and remove spilled oil from the environment.  While most spills occur as a single release and are usually relatively small, there are challenges associated with this, especially in the case of larger releases far from shore and during inclement weather.  With this in mind, it is important to consider all response tools that may be brought to bear in the case of a spill.

The purpose of the paper is to consider recent advances in oil spill technology and document recent work.  The paper describes in detail the following advances:

New containment systems have been developed and the effective operational use of ISB has been demonstrated.

The ability to use dispersants at depth provides an opportunity to respond to a spill as close to the source as possible, allowing for the use of less product than might be needed for a surface slick.

Surveillance, Monitoring and Targeting the Areas of Thickest Oil

A key aspect an effective response is the ability to identify the location of the thickest part of a slick, since it is often the case that the majority of the slick volume resides in a relatively small part of the area.  By identifying the areas of thicker oil, it is possible to deploy response tools to those areas specifically in order to significantly increase their encounter rate. 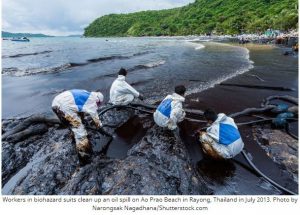