As report in Sputnik News, a team of researchers at the University of Manchester in Great Britain has been awarded a grant by the UK Engineering and Physical Sciences Research Council to develop a robotic system equipped with a wider range of sensors than ever before to map nuclear sites. 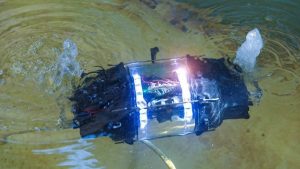 The world is home to a large number of sites contaminated by radioactive waste, which require the extent of the contamination to be delineated and remediation to occur.  The currently available methodology for mapping and assessing these radioactive sites are extremely expensive and time consuming, involving humans clad in radioactive protective gear, taking samples, and subsequent lab analysis.  In some cases, remote sensors are used which only offer part of the necessary picture.

The robotic system being development at the University of Manchester features optical spectroscopic techniques, advanced radiation detection methods and modern sensor technologies. Each piece of monitoring equipment on the robot will provide a piece of a holistic jigsaw, together with three dimensional mapping of materials within an environment.

The robot system was inspired by NASA’s Curiosity Rover, the robot used to explore the surface of Mars.  The robot will utilize advanced robotics and control technologies similar to those used in the Mars’ Rover.  It is due to be trialled at nuclear contaminated sites including Sellafield in the UK andFukushima in Japan.