Last November saw the Canadian federal government approve the Kinder Morgan Trans Mountain Expansion Plan and the Enbridge Line 3 Replacement Plan. Both projects have been met with fierce opposition from First Nations communities, local governments and environmentalists. Chief among their concerns is the risk of crude oil spilling into the environment. So it would be prudent to look at past spills involving each line and reflect on the possible dangers they pose.

A Note on Diluted Bitumen

One of the products that both the Kinder Morgan and Enbridge pipelines transport is diluted bitumen. Bitumen is a semi-liquid mixture of oil, sand and clay. This initial bitumen is difficult to transport due to its high density, viscosity and adhesive properties. To move bitumen, it is mixed with a diluent like naphtha or other light hydrocarbons.

When diluted bitumen is spilled onto a water body, it initially floats and spreads like conventional oil. Overtime, the volatile components in the oil evaporate and pose a possible health and fire hazard. As the spilled oil undergoes weathering, it becomes more viscous and dense. This weathered substance than mix with sediment to form tar balls and sink, making subsequent recovery very difficult.

Cleaning up a bitumen spill is a challenge. The oil on the surface of the water can be recovered using mechanical skimmers and booms. Meanwhile commercial chemical dispersants have limited effectiveness when used on diluted bitumen. The best practices for recovering bitumen that sinks underneath the water are still being researched.

The Kinder Morgan Trans Mountain pipeline currently transports light and heavy crude oils including diluted bitumen. It began transporting oil from Edmonton, Alberta to Burnaby, British Colombia in 1961. Since it began operations, there have been 82 spills that have been reported to the National Energy Board for the Trans Mountain line. 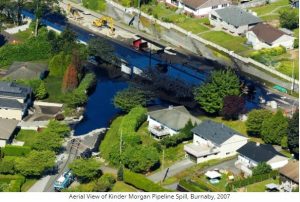 One noteworthy spill occurred on July 24, 2007 at 12:32 pm in the City of Burnaby (Population of 223 220). An excavator bucket that belonged to a contractor struck and punctured the line. Safe to say there was a good excavator repair needed as well as many other repairs. The heavy crude oil sprayed into the air for 25 minutes until the pipeline was isolated. About 234 000 L was released, covering local residences and roads and contaminating the surrounding soil. 100 000L of oil seeped into the storm drain system affecting both the Burrard Inlet and to a smaller extent the Kask Creek.

To respond to the 2007 spill in Burnaby, a unified command was set up involving Kinder Morgan Canada, the National Energy Board and BC Ministry of Environment. The RCMP and Burnaby Fire Department secured the area evacuated about 225 residents from their home. Meanwhile, the Western Canada Marine Response Corporation responded to the spill on the Burrard Inlet at 1:24 pm and was booming the area by 2:15 pm. Boomings, skimmers and absorbent pads were all deployed along the rocky shoreline along with a cleaning formula. The contaminated soil was excavated while surrounding homes were re-landscaped and cleaned. While more than half of the residents were able to return the same day, five of the houses were deemed unlivable for four months. Since the spill was deemed an accident, Kinder Morgan and the other two offending parties were fined $1 000 and had to contribute $149 000 to B.C.’s Habitat Conservation Trust Foundation. Kinder Morgan also had to pay $100 000 towards a new education and training program.

The Line 3 Pipeline is one of a series of pipelines used by Enbridge to transport crude oil and natural gas. It was constructed in 1967 and currently transports crude oil from Hardisty, Alberta to Superior, Wisconsin.

The initial spill was found near Clearbrook, Minnesota (Population of 533) on November 13, 2007 at 7:00 am. About two barrels of crude oil were released due to two pinhole leaks caused by fatigue cracks along the longitudinal seam of the DSAW pipe. The spill was reported to the Minnesota Office of Pipeline Safety Duty Officer at 8:22 am while the line was closed. The contaminated soil was extracted and moved to a disposal site.

The second release occurred when Enbridge attempted to replace the damaged pipe. On November 28, 2007 at 3:47 pm when the replacement pipe was being tested, the coupling used for the replacement failed. Oil was emitted as a spray and ignited once it reached a nearby heater being used by the workers.

The resulting fire and explosion led to the death of two Enbridge employees and the evacuation of several households. Local police, ambulances, fire departments and the Red Cross responded to the accident and Line 1, 2 & 4 were also shut down within minutes. Since the released oil was contained within a worksite excavation, it was allowed to burn off. However the thick smoke and soot were still a cause for concern.

Every pipeline incident is a teachable moment. A Pipelining Company can learn from past incidents to improve safety and operational practices to prevent future incidents. Both Enbridge and Kinder Morgan have made changes to their safety and operational procedures after these spills. Kinder Morgan formed the Pipeline Protection Group who focuses solely on pipeline protection. Enbridge made changes to their pipeline repair and replacement protocols. But it’s important to look back at these past incidents when considering the risk pipelines present.

Jerdon Small Phillips is an Engineer-in-Training and graduate from Sheridan College’s Environmental Control program with a B.Sc. in Chemical Engineering from Queen’s University. He is currently volunteering with the WEAO Professional Development and Communications Sub-Committee. He can be reached at [email protected]