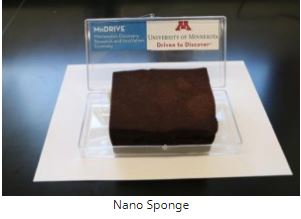 As reported in the Science News Journal, a team of researchers at the University of Minnesota College of Food, Agricultural and Natural Sciences (CFANS) created a sponge to address this growing problem. Within seconds, the sponge can absorb mercury from a polluted water source.

The team used nanotechnology to develop a sponge that has outstanding mercury adsorption properties.  Mercury contamination can now be removed to below detectable limits from tap and lake water in less than 5 seconds.  It takes about 5 minutes to remove the mercury from industrial wastewater.  The contamination is converted into a complex that is not toxic and the sponge can be disposed of in a landfill after use.  The sponge also kills fungal and bacterial microbes.

As an illustration, if Como Lake in St. Paul were contaminated with mercury at the U.S. EPA limit, a sponge the size of a basketball would be needed to remove all of the mercury.

This is an important development for the state of Minnesota.  More than 66% of the waters on Minnesota’s 2004 Impaired Waters List are compromised as the mercury contamination in those waters ranges from 0.27 to 12.43 ng/L (the EPA limit is 2 ng/L).

Many Great Lake States and Provinces have had to establish fish consumption guidelines, as mercury contamination of lake waters leads to mercury accumulation in fish.  It is advised that a number of fish species store bought or caught in the Great Lakes should not be consumed more than once a week or even once a month.

A reduced deposition of mercury is also projected to have economic benefits.  U.S. EPA forecasts show that reducing mercury emissions to the latest established effluent limit standards would result in 130,000 fewer asthma attacks, 11,000 fewer premature deaths and 4,700 fewer heart attacks each year.  That translates to between $37 billion and $90 billion in annual monetized benefits.

The new technology would have an impact on inspiring new regulations in addition to improving aquatic life, air and water quality, and public health.  Technology shapes regulations and this, in turn, determines the value of the market.