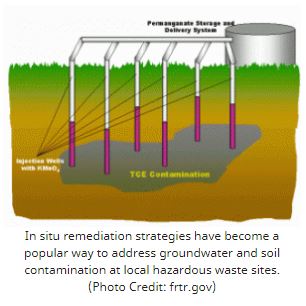 Hazardous waste sites are not exactly an endangered species: In Buncombe County, North Carolina alone, there are about 30 of them, relics of former manufacturing operations or other businesses that left behind toxic residues. Some of those companies were established before the 1970s, when pioneering environmental laws began regulating industrial pollution.  Others simply ignored the laws governing disposal of dangerous chemicals.  Either way, these contaminants are hard to get rid of.  Expensive cleanup efforts can drag on for decades with no sure resolution.

The Chemtronics site in Swannanoa, North Carolina for example, has been on the U.S. Environmental Protection Agency’s National Priorities List since 1982, yet there’s still no end in sight to the cleanup (see “Chemtronics: From Chemical Weapons to Conservation Easement,” March 24, 2016, Mountain Xpress). 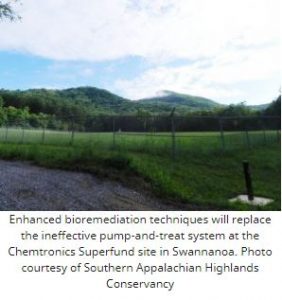 But a group of innovative strategies collectively known as “in situ remediation” could dramatically improve the prospects for restoring these and other high-profile Superfund sites more quickly and at lower cost.

Instead of trying to mechanically remove contaminants from a property, in situ remediation harnesses the ability of certain chemicals or bacteria to tackle them where they are and turn them into harmless substances.  Later this year, environmental contractors will implement such strategies at both those sites, under the auspices of U.S. EPA Region 4 officials.  And meanwhile, another local North Carolina project that’s already underway — RiverLink’s phytoremediation effort at the former Edaco junkyard on Amboy Road — gives some hints of these approaches’ potential to reclaim festering hazardous waste sites.

In situ remediation utilizes emerging technologies to insert various natural or mechanical elements into groundwater or contaminated soil. The specific strategy employed depends on both the particular pollutants involved and the physical characteristics of the site.

At Chemtronics, plans call for bioremediation: using bacteria that actually consume harmful contaminants.  Nutrients and oxygen will also be injected to help the bacteria do their job.  At the CTS site, meanwhile, a concoction of chemical oxidizers, which attack and break down the contaminants’ molecular structure, will be injected into the ground.  And at RiverLink’s Karen Cragnolin Park, native grasses infused with bacteria that “eat” the pollutants were planted at 26 places on the property in 2013.

Two key factors have helped such strategies gain traction: the emergence of newer technologies over the last two decades, and increased understanding of the limits of traditional cleanup methods. 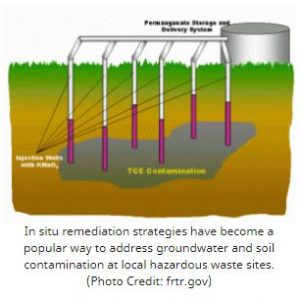 “The National Research Council estimated that more than 126,000 sites have residual contamination preventing them from reaching closure,” notes a 2016 report by Cascade Environmental, a consulting firm based in Washington state.  “Of those, 12,000 sites have residual contamination that will require 50 to 100 years to achieve restoration.  Many complex sites are characterized by persistent chlorinated solvent impacts that, for various reasons, have not responded to traditional or simplistic technologies.”

In the past, notes hydrologist Frank Anastasi, “If you found something in the soil or the groundwater, you had to dig it up or suck it up and get it out of there.  Now, we wised up and found out you can’t always just do that, especially with groundwater.”

In addition, he continues, older strategies such as pump-and-treat do little to address contamination in the surrounding soils and bedrock structures. “Think about drinking a soda at McDonald’s,” says Anastasi, a consultant to the POWER Community Advisory Group for the CTS site. “You suck the soda out through a straw and you think you’ve got it all; but if you let the ice melt a little bit, you suck some more out and you still taste some Coke.”

Hydrologist Frank Anastasi, who has served as a consultant for community members at the CTS of Asheville site, likens older pump-and-treat systems used to address groundwater contaminants to an empty soda cup one gets at McDonald’s.  “You suck the soda out through a straw and you think you’ve got it all,” he notes, “but if you let the ice melt a little bit, you suck some more out and you still taste some Coke.”

The long-running cleanup efforts at Chemtronics seem to bear out that assessment.  A series of samples and tests conducted by Altamont Environmental over a three-year period found that the pump-and-treat system that’s been in operation since the early 1990s has been only 23 percent effective in removing contamination, according to U.S. EPA site supervisor Jon Bornholm.

He’s overseen cleanup efforts at the site since the late 1980s, and he says the upkeep required to keep the pump systems functioning has been a constant nuisance.  “They were having a big issue with iron buildup, as well as bacteria buildup, in extraction wells,” Bornholm explains.  “Plus, you have the expense of electricity for running the extraction wells, as well as the treatment systems, and also the cost of discharging treated groundwater to the sewer system and maintaining that discharge line.  With in situ, we eliminate those costs.”

After several years of on-site pilot studies at Chemtronics, officials settled on in situ bioremediation as the most promising alternative strategy.  Altamont, says Bornholm, “was able to show that it was removing at least 51 percent” of the contaminants.

The Asheville-based consulting firm is currently designing a matrix of injection wells across the property near known contaminated groundwater “plumes.”  After that, contractors will inject a lactate solution (to give the bugs something to eat immediately), followed by emulsified vegetable oil (a long-term food source) and, to add more bacteria to the mix, “a bioaugmentation solution called KD-1.”

“It’s all about contact,” notes Bornholm. “We want to make sure the bacteria get in contact with the contamination.”

To read the remainder of this article, visit the Mountain Xpress website.

Max Hunt grew up in South (New) Jersey and graduated from Warren Wilson College in 2011.  He currently resides in West Asheville and enjoys discussing the secrets of the world with his cat. Follow him on twitter @J_MaxHunt