The theme of the planned one and a half day conference will be Brownfield Prevention.   Included in the event will be a bus tour of brownfield sites and a special brainstorming session on the tools for implementation in in medium-sized cities.  The objective the conference will be to develop a working paper about brownfield prevention tools.

The conference organizers hope to attract more than 20 municipal leaders in brownfield remediation from across Ontario and beyond.

The City of Brantford considers itself a leader on brownfield redevelopment and will showcase work done on two redeveloped areas – the former Greenwich-Mohawk and Sydenham-Pearl industrial sites.  The City of Brantford moved to clean up the sites without having a developer waiting in the wings for the remediation to be done.

The Sydenham-Pearl site, which has been cleaned up, consists of two properties at 17 and 22 Sydenham St.  Crown Electric, which went out of business in 1993, occupied 17 Sydenham. The property, seized by the province for unpaid taxes in 1995, became the site of numerous fires. In 2004, the city stepped in and demolished the building after there were three fires in eight months at the site.  The site at 22 Sydenham was home of Domtar, a manufacturer of roofing materials for decades. Northern Globe Building Materials Inc. took over the operation until it went into receivership and closed in 1999.  The property became a neighbourhood eyesore and the site of many fires including one in 2001, which forced the city to take action. The city spent $650,000 to level the buildings and clear the site.

Greenwich-Mohawk, meanwhile, was once home to some of Brantford’s biggest and best-known factories including Massey, Cockshutt and Sternson. When those companies closed, many of the buildings were abandoned and fell into disrepair.  Fires plagued the Greenwich-Mohawk site as well before the city moved in and the buildings were demolished. The site has since been cleaned up in a massive operation that cost close to $15.5 million. 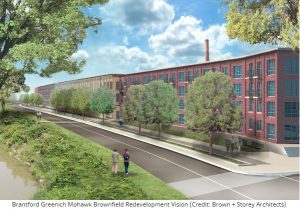