Residential heating oil storage tanks have been used in Canada for over 65 years. Although many have now been decommissioned and the home converted to natural gas, the implications of owning a property that has a historical underground oil storage tank (a.k.a. “UST”) are potentially significant, especially if the underground oil storage tank has leaked. If it is fully operational, getting some residential fuel delivery can help, but if there is damage then there is much to consider. As this article will briefly discuss, the resulting costs to investigate and remediate the contamination can be very high and the liability exposure quite broad. 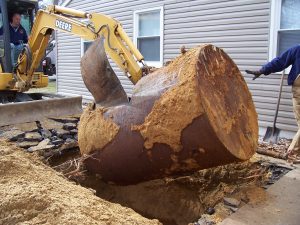 Of course, the costs to investigate and remediate a property will vary significantly from one situation to the next. However, many property owners are surprised to learn that it is not uncommon for the costs to reach as high as several hundred thousand dollars, especially in cases where there has been migration of contaminants and possible impacts under the foundation of the homes.

CAN I GET REIMBURSED FOR THE ASSOCIATED COSTS?

The EMA creates a statutory cause of action known as a “cost recovery claim” whereby a person who has incurred costs of remediation related to a contaminated site can recover such reasonably incurred costs from responsible person(s). Generally speaking, the costs recoverable under this cause of action include all costs to investigate and remediate the contaminants from the impacted properties. The key caveat is that the costs must be “reasonable”. The courts heavily rely on the opinion and recommendations of the environmental consultant when determining what costs are “reasonable”. Therefore, it is critical that a person undertaking such work retain a qualified environmental consultant to make any subsequent cost recovery claim against other potential “responsible person(s)” more likely to succeed.

HOW CAN I GET EXEMPTED FROM RESPONSIBILITY?

The scope of “responsible person” status, as indicated above, is quite broad under the EMA. However, the EMA also creates a number of exemptions. For example, there is an exemption that applies to an “innocent” purchaser of a property impacted by contaminants. To fall within the exemption, the person must establish that he or she had no reason to suspect the property was contaminated at the time of purchase and undertook all appropriate inquiries into the previous ownership and use of the property. This exemption is critical to potential purchasers of property where there is or is suspected to be a historical underground oil storage tank. Indeed, there are certain preventative steps that a potential purchaser can take to make it more likely that they fall within the exemption by, for instance, requiring a completed Property Disclosure Statement and requiring documentation if the tank was said to be decommissioned by a previous owner. Simply because a tank was decommissioned, does not mean that it has not caused or may cause contamination and, therefore, obtaining confirmatory documentation is important.

Five Reasons to perform a Hazardous Building Materials Assessment before every...