The British Columbia (B.C.) Ministry of the Environment (MOE) recently canceled the environmental permit for Cobble Hill Holdings for the operation of its contaminated soil landfill.  The landfill, located near Shawnigan Lake in British Columbia, had been use as a quarry.  A consortium of companies own and manage the landfill.  The companies include South Island Aggregates (SIA), Cobble Hill Holding (CBH), and South Island Resource Management (SIRM).  The permit, issued by the B.C. Environment Ministry permits the disposal of approximately 5 million tonnes of contaminated soil at the landfill. 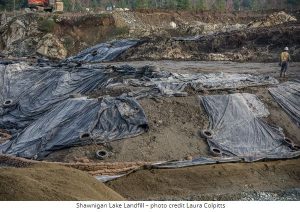 In a written statement, Mary Polak, the B.C. Minister of the Environment stated, ““Effective immediately, I am cancelling the waste discharge permit for Cobble Hill Holdings because the company has failed to meet the requirements outlined in my Jan. 27 letter.

“The company was given 15 business days to provide three required documents and submitted only two prior to the deadline given. Specifically, the company failed to provide the Province with adjusted financial security in the form of an irrevocable letter of credit.

In the written statement, the Minister Polak further states that the company failed to respond to outstanding non-compliances and missed deadlines with respect to the permit.

The letter further states that B.C. MOE are taking actions to ensure material on the property is managed in a way that does not present a risk to human health or the environment.  The letter does not specify the exact nature of the actions.

The minister’s letter of cancellation and reasons for decision can be found at: http://www2.gov.bc.ca/gov/content/environment/air-land-water/site-permitting-compliance/sia

The cancellation of the permit by the Minister of the Environment follows the January 24th release of a judicial review of the permitting process in which Justice Robert Sewell documented misrepresentation during the approval process including conflict of interest and “false and misleading information.”

South Island Aggregates/Cobble Hill Holdings was granted a permit back in 2013 under the B.C. Environmental Management Act (EMA) to receive contaminated soils and ash and process it through bioremediation or landfilling, and discharge treated effluent to an ephemeral stream.  The permit is specific to contaminated soil management activities. There has been fierce opposition to the landfill since that time.

Sonia Furstenau, the Cowichan Valley regional director who led the fight against the landfill, said, “We are happy the government cancelled the permit, but the cancellation leaves a lot of unanswered questions about the cleanup.”

There are approximately 100,000 to 200,000 tonnes of contaminated soil landfilled at the site.  The Minister of the Environment would not comment on if it threatened local health and the environment.  She said MOE technical staff would determine what would need to be removed.